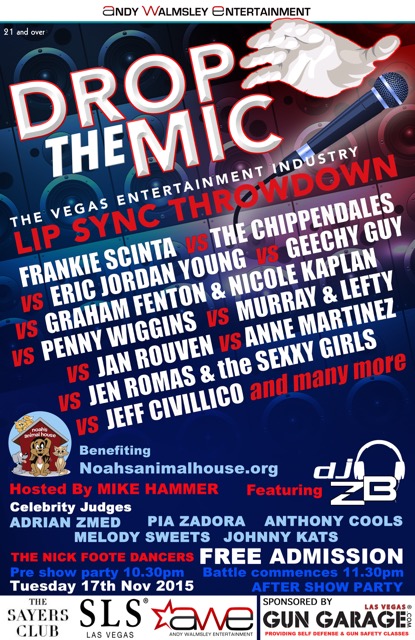 LAS VEGAS – November 6, 2015 – Emmy Award winning producer Andy Walmsley puts on a unique one-night show pitting Las Vegas entertainers and headliners entitled, Drop the Mic – The Las Vegas Entertainment Industry Lip Sync Throw-down in The Sayers Club at SLS Las Vegas on Tuesday, November 17 to benefit Shade Tree’s Noah’s Animal House. The event kick’s off with a pre-show party at 10:30 p.m. with the 70-minute Drop the Mic show beginning at 11:30 p.m. There will also be an after-party through 2 a.m. The event is free to the public, 21 and over, on a first come-first served basis.

The Show format will test 12 celebrities’ lip syncing skills to well known pop songs. This is not Karaoke – Celebrity syncers will be miming their songs and will receive points for presentation, dance skills and ‘selling’ their performance to the judges and audience.

The celebrity host for the event will be Comedy-Magician Mike Hammer, the headliner at the 4 Queens Casino. DJZB, Chris Phillips, well known in Vegas as the lead singer of the highly successful cover band Zowie Bowie will be making his DJ’ing debut. The Nick Foote dance troupe will back the celebrity Syncers.

The Celebrity Judges include: Pia Zadora, Adrian Zmed, Melody Sweets; Johnny Kats; and Anthony Cools will score the Syncers through first round, semi final and final round. The Winner of the first Drop The Mic competition will take home the soon-to-be famous Drop The Mic trophy.

“The purpose of the show is simply to have fun, we don’t really care about the competition element its just a laugh and a fun night and raising money for a really great charity,” said Walmsley. “The judges will be tabulating scores on humor and up-staging other contestants. We’re looking forward to a great show and we welcome everyone to come out to enjoy themselves.”

A Thank You is also extended to Gun Garage for a partial sponsorship for helping to fund and support the event. Gun Garage hosts handgun safety / self defense courses in Las Vegas and is a state-of-the-art indoor shooting range and retail attraction located just off the Las Vegas Strip at 5155 S. Dean Martin Drive For more information, contact Gun Garage at 702.440.4867 or visit www.GunGarage.com

Las Vegas was one of the first cities in the United States to address this important barrier facing victims of domestic violence. Noah’s Animal House was built on the grounds of The Shade Tree shelter in 2007 to provide safety, shelter & support for the pets of the clients of The Shade Tree.

Every 15 seconds, a woman is battered by her partner in the United States. People. In a national survey, 85% of women seeking safety in a domestic violence shelter reported pet abuse in their home. Often a woman will leave home after domestic violence and take refuge at a shelter with her pet only to be turned away because very few women’s shelters in the US accept animals. Typically an abused woman will return home to the abuser because the shelter was un able to take her and her pet. Noah’s Animal House is the ONLY women’s shelter in Las Vegas that also accepts pets.

AWE Andy Walmsley Entertainment. Emmy award winning Andy Walmsley has production designed some of the biggest shows on Television: American Idol, So You Think You Can Dance, Americas got Talent, Who Wants to be a Millionaire and The Biggest Loser to name a few. In Las Vegas Andy has designed Terry Fator, The Jacksons, Meat Loaf, Human Nature, Divas, Nathan Burton, Jeff Civillico, Americas got Talent live and many more. Andy Produced LOL with The Scintas at the Las Vegas Hilton. Walmsley produces the wildly successful Showbiz Roasts and the Entertainment Speaker series ENTSpeaks. AWE Andy Walmsley Entertainment