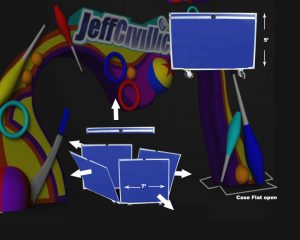 Comedian and juggler Jeff Civillico is attempting a Las Vegas first. He’s calling on his fans to help “crowdfund” a set piece for his show at The Linq, and his fans are answering the call.

Civillico posted the video below on his Web site, talking about his “social experiment.”

Within the first 24 hours of Civillico’s call to action, supporters had already donated about half the cost of the $10,900 needed to construct the new addition to his show.

The set he’s looking to have built is called “The People’s Arch,” an inflatable arch that’s 40 feet wide and 20 feet tall. Once built, the arch will burst out of a case and inflate in about 20 seconds, adding some great color to Civillico’s already “colorful” show.

The arch was designed by Andy Walmsley (set designer for shows like “American Idol”), who donated his services to the project (about $25,000 in value).

Much like the arch, rumors about Jeff Civillico being “just a juggler” have been greatly inflated. He’s a comedian that also happens to be a talented juggler.

In a way, Civillico’s show is a “start-up.” While he draws big audiences based on his jaw-dropping juggling and rat-a-tat banter, he re-invests profits from ticket sales back into advertising and other costs of putting on a Las Vegas show. According to his site, he’s yet to draw a salary from his show.

So, you want to help make something cool happen? Visit the “People’s Arch” page of Jeff Civillico’s site and donate. Ten bucks is the recommended donation. That’s a pretty inexpensive way to be a part of Las Vegas history in the making.

Oh, and did we mention that those who make the $10 donation also get a ticket to the show?

They said Jeff Civillico was nuts for trying crowdfunding! Oh, he’s still pretty nuts, but the crowdfunding idea doesn’t seem quite so crazy after all.

Yes, this blog personally donated, because to be honest, we love Jeff Civillico’s show and want to see this arch thing happen.