Another day, another show… or two! Today was jam-packed for Show Creators Studios, where we hosted not one, but two virtual events simultaneously. Just when you think you’ve seen everything as a virtual event emcee, right? Well, as always, the fantastic Ian and Amanda of Show Creators made sure the entire afternoon went off without a hitch for my friends at MC3!

The entire day was a testament to the unbelievable relationships you build in the events industry. I was on the second floor of Show Creators Studios, which was revamped overnight to accommodate a virtual event for MC3 and Abbott Vascular. My buddy Adam Christing of Clean Comedians was on the first floor for his own event. Show Creators Studios was at the heart of it all!

Here’s a backstage view of a busy day at the studio — and what happens behind the scenes with a virtual event emcee.

A Virtual Event with MC3 and Abbott Vascular…

MC3 is a Philadelphia-based production company known for creating innovative meeting and training experiences for a range of life science businesses. I’ve had the pleasure of working with MC3 a few times in the past, namely on virtual events for Endo Pharmaceutical. A few months back, Geoff McCall, Creative Director at MC3, reached out about a potential emcee opportunity for a hybrid event for their client, Abbott Vascular.

After we cleared the dates, I geared up to fly to Santa Clara, California and meet the Abbott Vascular executives and MC3 production crew to prepare to live-stream our meeting. Well, as is life in the era of COVID-19, the company decided to pivot to fully virtual… four days before we were set to go live. Fortunately, I had access to a virtual event production company, Show Creators Studio!

Ian and Amanda at Show Creators Studio were quick to help completely transform the upstairs studio into the perfect backdrop for the Abbott Vascular event. From lighting to branding, every detail was covered — and was one less thing my contacts at MC3 had to think about while preparing for the event! The show ultimately went off without a hitch, and we even got the Abbott gang to join in with whacky slippers and my notorious confetti cannons. 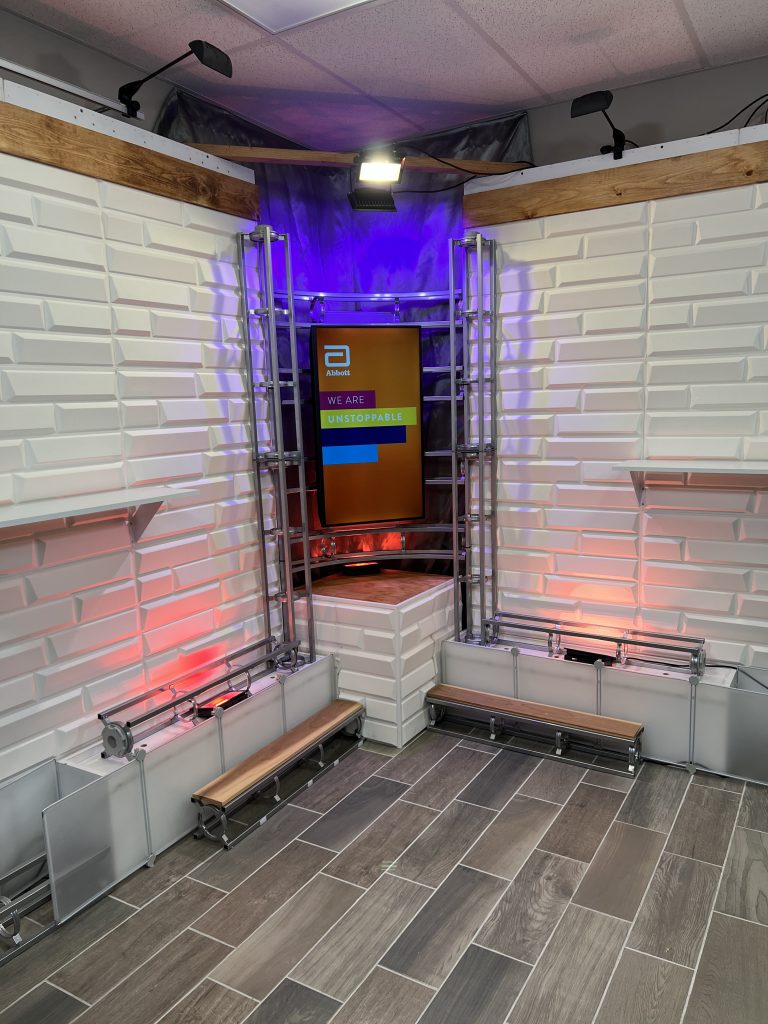 And a Second Virtual Event with Adam Christing!

While I was on the second floor of Show Creators Studios with MC3 and Abbott Vascular, my good friend Adam Christing of Clean Comedians was doing his thing on the first floor. You might be wondering why we had both floors booked simultaneously… Well, that’s a funny story! You see, Adam lives out in Los Angeles, and that’s typically where he films his content.

Not too long ago, Adam reached out for a recommendation of where he could film an upcoming virtual event. Of course, I suggested he head straight to Show Creators Studios — not knowing that rather than be in California on his filming date, I would end up right upstairs! So, it was quite literally a happy accident that we both got to virtual event emcee at the studio that day.

I have to admit, it was a total blast having a friend in the studio. Not only was it awesome to have another entertainer and virtual emcee to bounce ideas off of, but it also felt great to know I was helping out an old pal. After all, me of all people can vouch for the professionalism and flexibility of Show Creators Studios! You can take a sneak peek at both of us in action in the video below.

It seems repetitive to say, but folks, these are weird times for events. Just this week, I had an in-person corporate entertainment event for Ace Hardware from 2 to 3 p.m., then was in the studio to prepare for a virtual show at 4 p.m. the same day. One minute I’m doing a 1,000-person comedy show on the Strip, and the next I’m on a Zoom meeting with executives in Illinois.

As we all continue to navigate the ‘new normal’ of events, it’s become obvious that we must expect the unexpected. Something I can rely on? Show Creators Studios! I want to give a big thank you to Ian and Amanda for always being so accommodating, and more importantly, I want to congratulate them on their 10 years in business! What an achievement!

You two are the best and I am so thankful for you, and the studio, these recent years.

A Virtual Event Emcee with a Backup Plan (or Two)

If you’re planning an upcoming event and are uncertain whether you’ll choose in-person, hybrid, or virtual, don’t let that hold you back from connecting with a professional emcee. With more than 18 years of experience, I am your sure-fire bet, no matter what option you choose. Even if plans have to pivot just days before your event, I have the professionalism and resources to make it work, every time.

Whether you are a production company seeking talent, an organization looking for corporate entertainment, or an event planner in need of a professional master of ceremonies, I’m prepared to tackle it all. Reach out today to connect with a virtual event emcee who always has a backup plan… or two!