By “Pulse of Vegas” Blog

When comedian-juggler Jeff Civillico felt his show, “Comedy in Action” at The Linq, could benefit from a new set, he did something extraordinary. He offered his fans the chance to help pay for it. To say they rose to the occasion would be a hefty understatement.

Within a week of Civillico sharing his idea for crowd-funding a massive, inflatable “People’s Arch” to give his energetic show some additional flair, 321 of his fans (including this Las Vegas blog) had contributed more than $10,500 to get it built.

On Sep. 26, 2012, Civillico inflated his new arch for audiences for the first time, set to a tongue-in-cheek ditty called “Also Sprach Zarathustra” from “2001: A Space Odyssey.” Take a look.

The colorful, 20-foot tall, 40-foot wide arch was designed by acclaimed set designer Andy Walmsley, who has designed sets for shows like “American Idol” and others. Walmsley even donated $25,000 of his services to make the arch happen. 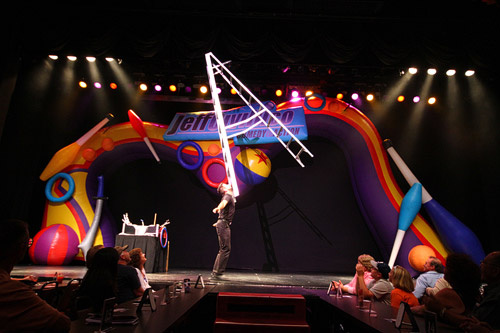 Now, audiences will not only be able to enjoy Civillico’s rat-a-tat comedy and dumbfounding juggling, but they’ll also get to feast their eyes on the impressive “People’s Arch,” made possible by Jeff Civillico’s fans. And the Internet. And this blog. But mostly those first two things. 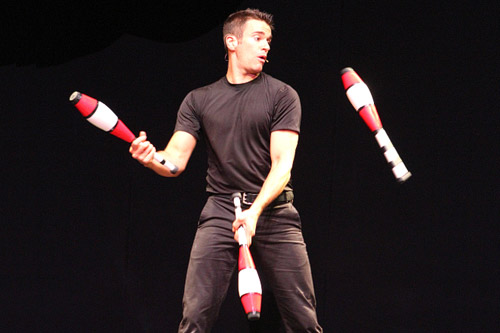 Catch Jeff Civillico at the The Linq (soon to be The Linq). He hangs out with fans after his 2:00 p.m. show, so let him know we sent you.

And ask him to autograph your bosom. Jeff Civillico’s thoughtful like that.