Would you believe me if I said I was still performing at makeup events that were initially scheduled pre-COVID? It’s true! Case in point? My recent event with ABC Supply Co., Inc. in San Antonio, Texas — a show that first started to take shape all the way back in 2019! Nearly three years later, and I could not have been happier to finally take the stage at the Southwest Region 2022 Sales Meeting.

I had the pleasure of being the corporate emcee and corporate entertainer at the event, even participating in some hysterical skits that the ABC Supply team had put together. I also performed some of the most iconic stunts from my Las Vegas “Comedy in Action” show before the evening kicked into an epic awards ceremony. Here’s a quick recap of my time with ABC Supply!

An Event Nearly Three Years in the Making with ABC Supply

ABC Supply Co., Inc. is the nation’s leader in supplying and serving building contractors, with over 800 locations in 49 states powered by more than 15,000 associates. This team tackles everything from roofing shingle and tiles to stucco and siding solutions, and they deploy a trusted fleet of vehicles to bring their products just about anywhere across the country.

I first met the ABC Supply team at a pitch meeting in 2019, when the term “BC” didn’t always mean “before COVID.” I flew to speak with the executive team, including Southwest Region Vice President Jonathan Shepard, at their office in Dallas, Texas. I left that meeting feeling pumped about what the future would have in store for the event… not knowing just how much the future truly had in store!

Of course, a little thing called coronavirus pushed the event from a target date in 2020 to 2021, which eventually became 2022. When the time came for me to arrive at the Hyatt Regency Hill Country Resort And Spa in San Antonio, I had to pinch myself to confirm we had finally arrived! After all this time, the energy at the Southwest Region 2022 Sales Meeting was palpable.

Corporate Entertainment with a Side of Comedy (in Action!)

If you’ve been following my blog for a while, you know that I love when clients work comedy sketches into their corporate entertainment — kind of like the Green Compass “Weekend Update” skit we do every year! So, you can imagine how excited I was to learn that Jonathan Shepard and Scott Heitmeier, Regional Business Manager at ABC Supply, had a whole skit ready to go!

The two had brainstormed a news desk-style skit where they shared ABC’s annual performance in its major product categories, then kicked the show over to a “reporter in the field”… yours truly! I hit the floor to interview various division sales managers (DSM) on district results live from the audience. From Texas to Missouri and Arkansas, it was a super engaging and educational segment.

And what comes after a bit of education? A bit of laughter, of course! I hit the floor once more to interview a few of the Southwest Region 2022 Sales Meeting winners, but this time, in full-on character. We had Jack Laddervator, Barry Buttjoint, and Ichiro NoTPO, complete with voice and outfit changes, to speak with ABC Supply big-sellers and have some big laughs.

It was awesome to flex my comedic chops a bit more than usual, and even better, I was able to transition from corporate emcee to corporate entertainer later in the evening! Jonathan pointed out that I was indeed a Las Vegas performer and not a news anchor (shocking!), and I launched into a 30-minute set that brought the razzle dazzle of the Strip straight to San Antonio.

A Fantastic Crowd and Even Better Business People

It’s no secret that just about every industry has been under major stress these past few years, and the country’s largest wholesale distributor of roofing supplies was certainly no exception. Between supply chain delays and widespread inflation, one of the largest suppliers of exterior and interior building products was stretched just as thin as local mom and pop shops.

As the housing market has surged in recent months — and more people have remained planted firmly at home — the ABC Supply Co. team has come out of the pandemic even stronger than before, but it’s no secret that everyone is tired. Once everyone was able to gather again, the vibe was infectious! It was wonderful to see these fantastic business people kick their feet up and laugh.

“Jeff was terrific. He went along with our crazy ideas and made them better than we could imagine. He was a field reporter for our general session that was absolutely hilarious. He entertained us in the evening with his unbelievable talent, energy and humor. His audience participation was amazing. I haven’t laughed that hard in quite some time. Thanks Jeff!” 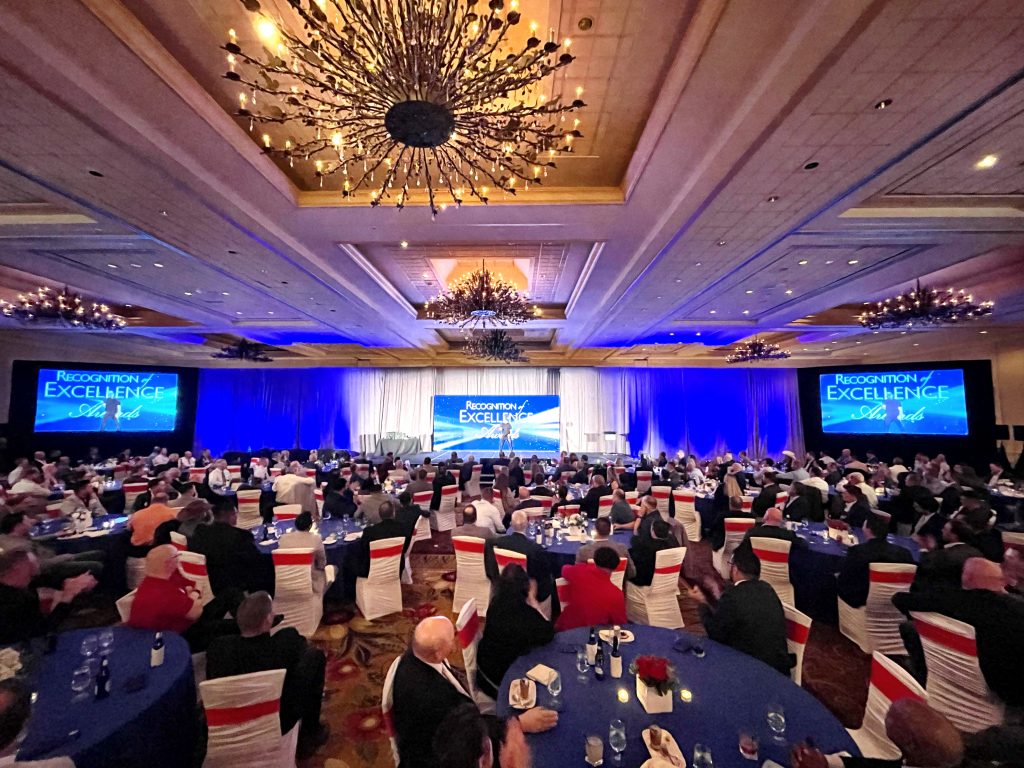 In my time as a professional emcee and corporate entertainer, I’ve encountered two types of clients: the type who want to involve the talent in just about every aspect of the show, and the type who have everything covered and just need the talent to make the show cohesive. Truly, I love working with both of these clients — they both allow me to flex my creative chops!

Yet, with a client like ABC Supply, I loved getting to sit back and let the team at the helm of the show really steer the event creatively. I was able to come on board as a correspondent to help all of the hard work Jonathan, Scott, and the whole ABC team look even better. That’s the beauty of client-focused entertainment, I don’t need to take over the spotlight… I can enhance the groundwork your team has already laid!

Complete Your Event with a Corporate Emcee and Entertainer

Do you have an event that was supposed to occur pre-COVID but still hasn’t hit the stage? Are you tired of your typical conferences or sales meetings, and want to inject a bit of personality and fun? You need a corporate emcee and entertainer, like me! With a background as a Las Vegas Headliner with Caesars Entertainment, I can act as a true event partner for your event or step in to fill the gaps that will make your event truly special. Send me a booking inquiry today to learn more!