Corporate event entertainer Jeff Civillico here… After graduating from Georgetown University in 2005, I focused on becoming the best corporate event entertainer I could be.  I really began to tailor my show to corporate events.  I was fortunate enough to put my skills as a corporate event entertainer to the test by hosting the touring production show, It’s Magic.  It’s Magic is an extremely well-known touring show in the live entertainment industry.  I first got linked up with It’s Magic after performing at Hollywood’s Magic Castle in 2008.  After emceeing many shows for It’s Magic on the West Coast, I was thrilled to get this opportunity to travel with the production to the East Coast.  At Mohegan Sun I shared the stage with seven magicians, each highly-respected in the field.  I’ve had the pleasure of working with a lot of great performers over the years, but THIS show was really special for me.

Check out what Magic Magazine had to say about my skills as a corporate event entertainer: 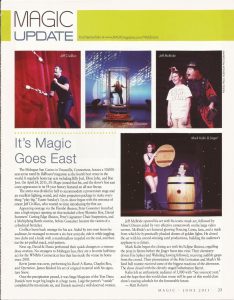 The Mohegan Sun Casino in Uncasville, Connecticut, house a 10,000- seat arena rated by Billboard magazine as the fourth best venue in the world. It regularly hosts top acts including Billy Joel, Elton John, and Bon Jovi. On April 24, 2011, It’s Magic joined that list, and the show’s first east coast appearance in its 54-year history featured an all-star lineup.

The arena was divided in half to accommodate a proscenium stage and an excellent lighting, sound, and video projection package to make everything “play big.” Easter Sunday’s 3 p.m. show began with the entrance of emcee Jeff Civillico, who wasted no time introducing the first act.

Civillico burst back onstage for his act. Aided by two men from the audience, he managed to mount a six-foot unicycle, ride it while juggling two clubs and a knife with a marshmallow impaled on the end, and then ear the jet-puffed snack, mid-pattern.

Next up, David & Dania performed their quick-changes to a tremendous ovation. No strangers to Mohegan Sun, they are a favorite half-time act for the WNBS’s Connecticut Sun that has made the venue its home since 2003.

Kevin James was next, performing his Bowl-A-Rama, Chaplin Box, and Operation. James finished his set of original material with his signature Snow.

Once the precipitation passed, it was ‘Stage Magician of the Year’ Dana Daniels’ turn to get big laughs in a huge room. Luigi the parrot’s “vanish” completed the ten-minute set, and Daniels received a well-deserved ovation.

Jeff McBride opened his set with his iconic mask act, followed by Miser’s Dream aided by very effective camerawork on the large video screens. McBride’s act featured glowing Dancing Canes, fans, and a mask from which he hypnotically plucked dozen of golden lights. He closed the set with his award-winning card productions, building the audience’s applause to a climax.

Mark Kalin began the closing act with his Eclipse illusion, engulfing the prop in flames before the Ginger burst into view. Their chemistry-driven Fire Spiker and Wakening Sawing followed, receiving audible gasps from the crowd. Their presentation of the Pol Levitation and Mark’s pilliar ball routine received some of the biggest reactions of the afternoon. The show closed with a cleverly staged Substitution Barrel.

Kalin left and enthusiastic audience of 5,000 with “See you next year,” and the hope that this world-class venue will be part of this world-class show’s touring schedule for the foreseeable future.”

Thanks to It’s Magic for allowing me to me the Master of Ceremonies!  Please be sure to check out more of my corporate event entertainer videos.