Corporate entertainment is one of Jeff’s specialties.  He has performed for hundreds of major companies nationwide – banquets, award shows, general sessions – you name it! 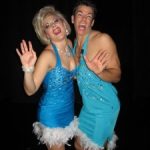 “To Whom It May Concern:

As a producer myself, I know how very busy someone like yourself can be… but I wanted to take a moment and write an open letter to other show producers and talent buyers regarding a wonderful entertainer, Mr. Jeff Civillico, whom I’ve recently met and believe could possibly be a wonderful asset to any entertainment operation. Let me make it clear that I am not representing Mr. Civillico at all. Here’s a brief background of my recent introduction and association with him…

In addition to producing touring shows, festivals and corporate events, I operate and produce all of the shows at the Music City Centre theatre in Branson, Missouri. More recently (November 15, 25, 2007), I produced a two-week international festival at the mega-resort, Genting – City of Entertainment, (www.genting.com.my) just the outside of the Kuala Lumpur, Malaysia. This event included two production shows, one in a 6,000 seat venue and the other in an 1,800 seat theater. I needed a host for the second show who could keep the show moving and entertaining… someone who exhibited a stage personality that was likeable, spontaneous and professional.

Another producer friend of mine in Florida suggested Mr. Civillico, a professional host/comedian/juggler.  I must say that I couldn’t have made a better choice. Even at the youthful age of 25, Jeff has years of experience with Disney cruise lines, Holland-America, the QE-2, Princess, and many others. At the very young age of 15, he was awarded the gold medal in his class at the 1998 International Jugglers’ Association World Championships. However, please understand that Jeff is far more than a comedy juggler… he’s an incredible host and personality. He’s very funny, he sings, he moves well on stage and he has an impeccable sense of timing and spontaneity on stage.

After watching him host ten shows for me in Malaysia, I immediately realized what a unique wonderful talent this young man possesses as an emcee, host, personality, entertainer, etc.  Please understand that I am not representing Jeff in any way and I have nothing to gain from any potential opportunities. It’s simply that I do recognize incredible talent… and Jeff certainly falls into that category.”

Be sure to check out more of Jeff’s corporate entertainment testimonials!