As an established event emcee, two of the most rewarding aspects of my career are forging long-lasting relationships with incredible nonprofits and making profound differences in the lives of those they serve. I feel beyond fortunate when one event can check both boxes — like the UMC Foundation ‘Evening of Hope’ Gala!

My relationship with the UMC Foundation goes way back… way before I even had my own clean comedy show on the Las Vegas Strip. I’ve seen the miracles that occur within the walls of UMC and UMC Children’s Hospital firsthand, and was honored to play the role of nonprofit emcee in the inaugural ‘Evening of Hope’ Gala.

Here’s a recap of the UMC Foundation’s first-ever function and why it was meaningful on so many levels! 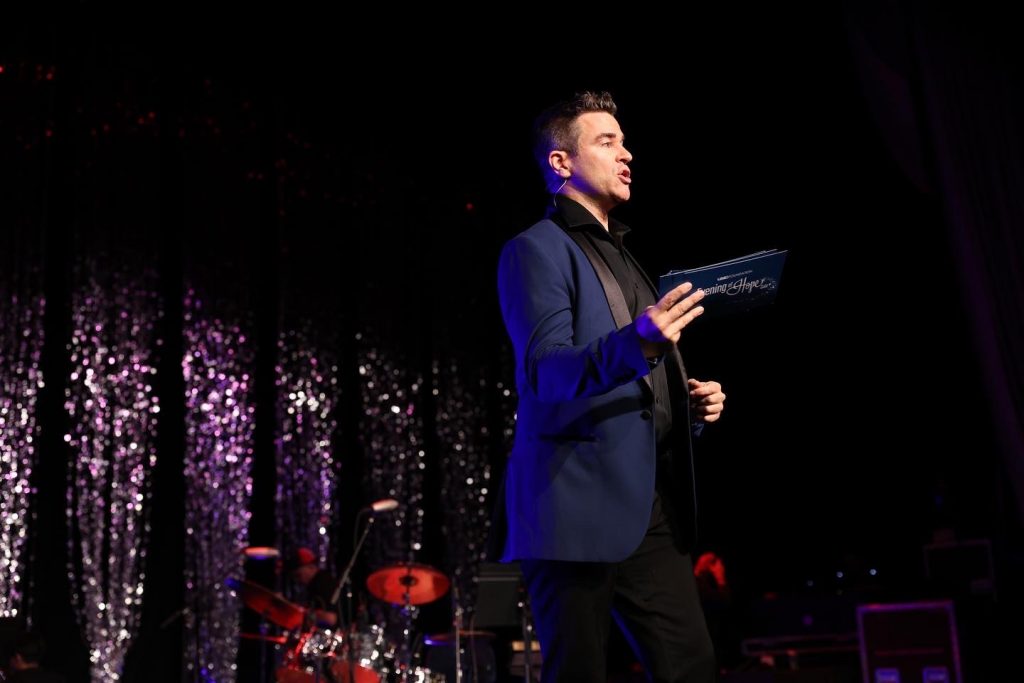 A Rich History with UMC

The University Medical Center, more frequently referred to as UMC, is the only nonprofit public hospital in Nevada. Since 1931, UMC has been home to the highest level of care available in the state, including Nevada’s only Level I Trauma Center, Designated Pediatric Trauma Center, Verified Burn Center and Transplant Center.

Over the past nine decades, UMC has become a trusted leader in times of crisis, especially here in Las Vegas. From the unfathomable Route 91 Harvest Festival shooting in 2017 to the more recent COVID-19 pandemic, UMC staff and volunteers have remained on the frontlines as first responders to the Las Vegas Strip.

For those who are unaware, Win-Win Entertainment is a national nonprofit that brings smiles to children in hospitals by arranging in-person and virtual visits from athletes, celebrities, and entertainers. I pitched a family-friendly show to Danita Cohen (who’s now UMC’s Chief Experience Officer) and the rest is history!

I began performing clean comedy, family-friendly shows for kiddos in UMC Children’s Hospital before I even landed my own show on the Las Vegas Strip. The wonderful team at UMC is one of the first things I remember about Vegas, including the phenomenal child life specialists, staff, and volunteers I’ve known all these years.

A Night of Firsts and Surprises for All

As the state’s most sophisticated medical center, UMC and UMC Children’s Hospital require robust resources to maintain proper patient care. This is where the UMC Foundation comes into play. The Foundation is an independent, charitable nonprofit organization that serves as the community fundraising arm of UMC.

My good friend Danita, who’s also the hospital’s Chief Experience Officer, worked hand-in-hand with the UMC Foundation to create, develop, and execute the largest fundraiser in the hospital’s 91-year history. Of course, the stakes were high for the first-ever ‘Evening of Hope’ Gala… but the energy in the room was even higher!

Take a look at what made this free-flowing event a first-time success (aside from me as the event emcee!).

It’s a no-brainer that booking the Wynn Las Vegas as your venue is always a good start for event planning. But after all my years in the Wynn for events, I can confidently say — I barely recognized the room, let alone realized it was a ballroom! The venue was divided into a welcome area with a small stage and a larger open space… without dozens of banquet tables (gasp!).

The larger area was decked out with twinkling hanging lights to match the evening’s ‘Starry Nights’ theme. Even better, the Las Vegas Academy of the Arts (LVA) orchestra was present and began to play as soon as the black curtains opened in the welcome area. It was a very dramatic entrance to an even more magical evening!

Now, you might be wondering why the event space didn’t have banquet tables at a fundraising gala. Well, the UMC Foundation decided to do something that I’d never seen done before in all of my years of experience! They invited more than a dozen celebrity chefs from across the Las Vegas Strip to set up insane food stations!

Rather than the boring, run-of-the-mill plated chicken dinner, the UMC Foundation gathered the community’s most highly-awarded chefs to create and serve their signature dishes right in the Wynn. There were even world-class mixologists serving elegant (and bottomless) cocktails. It felt like a party, not a formal sit-down dinner!

3. Entertainment Second to None

Of course, you can’t create a festive environment without entertainment. Though I served as the event emcee and not the corporate entertainer at this event, I was still blown away by the caliber of headliners for the 2022 UMC Foundation ‘Evening of Hope’ Gala. But up first for entertainment was the LVA orchestra!

I’m on the advisory board for LVA and know just how hard these high schoolers work to perform at this level. They opened the evening with a bang before two Spiegelworld acts — Absinthe and Atomic Saloon Show — took over the floor. Both acts were more atmospheric, moving through the venue to mingle with guests.

However, since this was a community-based event, a ton of local attendees were already familiar with these acts. To combat this, Danita and the UMC Foundation brought in Katharine McPhee and Erich Bergen of the Waitress musical, who created a special show with musical director Michael Orland and the Michael Orland Orchestra!

This one decision brought a unique Broadway flair to the Las Vegas Strip. As a switch-up to the regular acts at the Wynn, folks were ecstatic to see and hear the music that night and flooded the front of the stage for the one-of-a-kind performance. Katharine McPhee even came into the audience to dance with attendees!

Once Katharine and Erich left the stage, it was time for a celebratory cake cutting. But by that point in the evening, it was clear that the ‘Evening of Hope’ was not your typical gala… so, you know they couldn’t do a boring, ordinary cake cutting! Nope, they had to cut the cake UMC style — with unparalleled precision, that is!

For incredibly precise cake slices, the UMC Foundation brought in the da Vinci Xi Surgical System.  For those who aren’t familiar, the da Vinci system is a robot that assesses surgeons during delicate and complex operations. Gar Matson, the longest serving volunteer at UMC, came down to control the system for the ultimate cake slice!

5. Ultimate Start to a Living Legacy

Last but certainly not least, a night of firsts and surprises ended with the sweetest gesture for UMC CEO Mason Van Houweling. As a long-time member of the medical center, Mason had always wanted something to chronicle UMC’s history. Towards the end of the evening, Danita revealed the first-ever “UMC: A Living Legacy” coffee table book!

The book was a total surprise to Mason and had been under wraps for more than a year. The first printing, known as the “Legacy Edition,” was limited to only 500 copies. The team even left a few pages blank for attendees to write messages, include signatures, and personalize with photos from the venue’s photo booth!

An Honor to Serve as Event Emcee

It was truly an honor to serve as the event emcee at the first-ever UMC Foundation ‘Evening of Hope’ Gala — and I do not say this lightly! As much as I love being a nonprofit emcee, the most rewarding events are those that connect with me on a personal level, for an organization I really care about and have such a rich history with.

Even more, I was thrilled to serve as the first-ever event emcee for the inaugural gala! Talk about being a part of history, right? You know I had to give 110% for the UMC Foundation…not only because I am so fond of the entire UMC team, but also because we had to set the bar exceptionally high for this organization!

I leveraged all of my nonprofit emcee abilities for this event, including:

Overall, the UMC Foundation was able to raise an incredible $100,000 for the new Pediatric Sedation Unit! I loved tag-teaming with the auctioneer, Keith, to keep the audience engaged and ready to bid big. This may have been the first UMC Foundation ‘Evening of Hope’ Gala, but I can bet it won’t be the last! 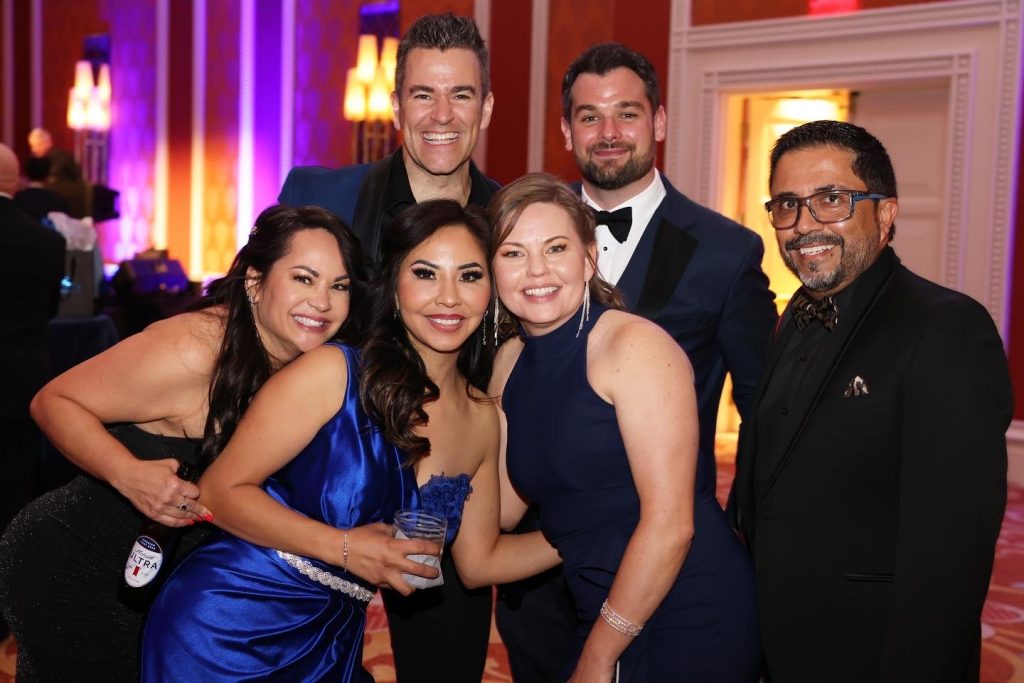 “Thank you for being absolutely amazing to work with! You played such a big part in the success of our inaugural Gala and personally put my mind at ease. I didn’t have to worry about anything MC related because I knew you had it! You exceeded my expectations and I can’t wait to work with you on many more events.”
~Destiny Hampton, Foundation & Community Outreach Coordinator at UMC Foundation

Need a Nonprofit Emcee for an Upcoming Event?

It’s clear that the UMC Foundation ‘Evening of Hope’ Gala was planned with the highest attention to detail… detail that included me, the event emcee! When it comes to fundraising, a nonprofit emcee is a must-have to ensure that attendees remain engaged, entertained, and most importantly, educated on the importance of the cause.

With me as your event emcee, I can guarantee that we can drive resources for your unique mission. Send me a booking inquiry today to get started!