Do you hear that in the distance? It’s a bird, it’s a plane, it’s dozens of former Georgetown Chimes singing in harmony! That’s right, folks, The Georgetown Chimes are at it again, this time with me at the helm as the event emcee of our 75th Anniversary Celebration. Yes, I say ‘our celebration’ — your favorite professional emcee first flexed his vocal chords as Georgetown Chime No. 193!

It’s no secret to anyone who knows me how fond I am of my alma mater, Georgetown University. But what some may not know (unless we’ve crossed paths at karaoke), is that I was also part of The Georgetown Chimes, and our reunions hold a special place in my heart. This reunion was probably the most special to me, because I was able to do my thing as a professional emcee for my people!

Here’s what went down this past weekend to celebrate the Georgetown Chimes 75th Anniversary.

Fellowship and Harmony with The Georgetown Chimes

For those who haven’t had the good fortune of hearing one of our signature barbershop quartets, The Georgetown Chimes are an all men’s a cappella group founded in 1946 at, you guessed it, Georgetown University. The group has a pretty broad set list that ranges from original barbershop standards to show tunes and even modern-day songs (you can thank the Baby Chimes for that!).

The Chimes received their signature name from the original bells that hung from South Tower of Healy Hall, which would ring out during the group’s rehearsals. When the bells were damaged early in the group’s tenure, the Chimes used donations earned from their performance on the Ed Sullivan Show to replace them. Talk about big shoes to fill, am I right?

What began as a handful of Georgetown’s crooners has grown to a family of more than 270 that’s forever bonded by music and memories, along with our values of fellowship and harmony. And when I say forever, I mean it — the Chimes are a lifelong organization! With just two or three new Chimes added per year, I feel so lucky to be in such great company. 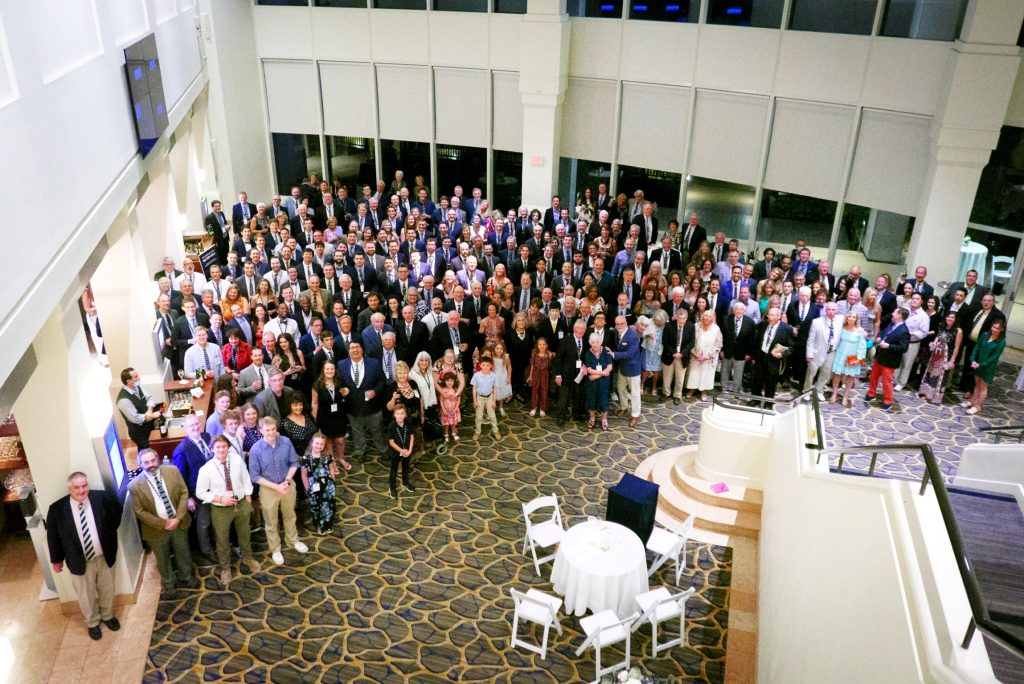 My Favorite College Memories as Chime No. 193

When I think of my college experience at Georgetown, the Chimes were most of it. You see, Georgetown doesn’t have the most raging fraternity scene, like say, the University of Miami. But if you were part of the Chimes, you stayed in your own house with other Chimes — it was a total blast! From parties to impromptu ballads, it was exactly what you’d expect from a male a cappella group.

Aside from life on campus, I was able to travel a ton with the Chimes. We did shows in Paris and San Juan, traveled all over the country to perform at other colleges, and even entertained at corporate events. Hey, maybe that’s where my future in corporate entertainment came from! The Georgetown Chimes definitely prepared me to hit the main stage, I know that for sure.

I have a boatload of fond memories from my time with The Georgetown Chimes, as well as tons of fun experiences at our annual reunions. Due to COVID, the Chimes weren’t able to gather for the past two years — so this reunion felt like a true homecoming! What made things even better was that this year was The Chime’s 75th Anniversary Celebration.

After past reunions in San Francisco, Chicago, and the Jersey Shore, the gang all met up in Tampa, Florida this year. The event itself was held in a massive tent attached to the Grand Hyatt Tampa, where the subtle breeze and palm trees really set the tone for the celebration. The Chimes went all out this year with a big stage, a live band, and me as the professional emcee!

This reunion to celebrate 75 years of aca-awesomeness (yes, I went there) was the biggest and best yet. We had a first-time show on Friday night, named ‘Saloon’ after our founder’s favorite melody, and I was able to introduce tons of my old buddies, some of the younger guys, and even a few Chimes’ spouses and family members who honored the members we’ve lost over the years.

I was able to keep everyone engaged, do juggling bits with my friends, chat history with the legacy Chimes, and share stories with attendees. The aura of merriment and camaraderie was palpable, and I was so stoked to do my thing in front of people I call family. For someone who typically does corporate events and conferences, a little a cappella action was just what this event emcee needed.

“Two weeks ago, I hosted the 75th anniversary gala for a barbershop group based at Georgetown University.  250 people, including 140 members and 110 family members and friends descended upon Tampa, Florida, for three days of singing, friendship, fun, and more singing.  We featured a talent review of Broadway songs, magic, and amateur rock bands. I was worried about keeping things moving, and unsure how to keep a critical audience of musicians engaged.

The solution? Jeff Civillico! He kept things moving, entertaining the audience with juggling in between acts, and gently but firmly corralled the talent with humility, professionalism, and unfailing good humor. The evening was a great success, thanks to him. We are lucky to have him as a lifetime member, and as an emcee for the review.” 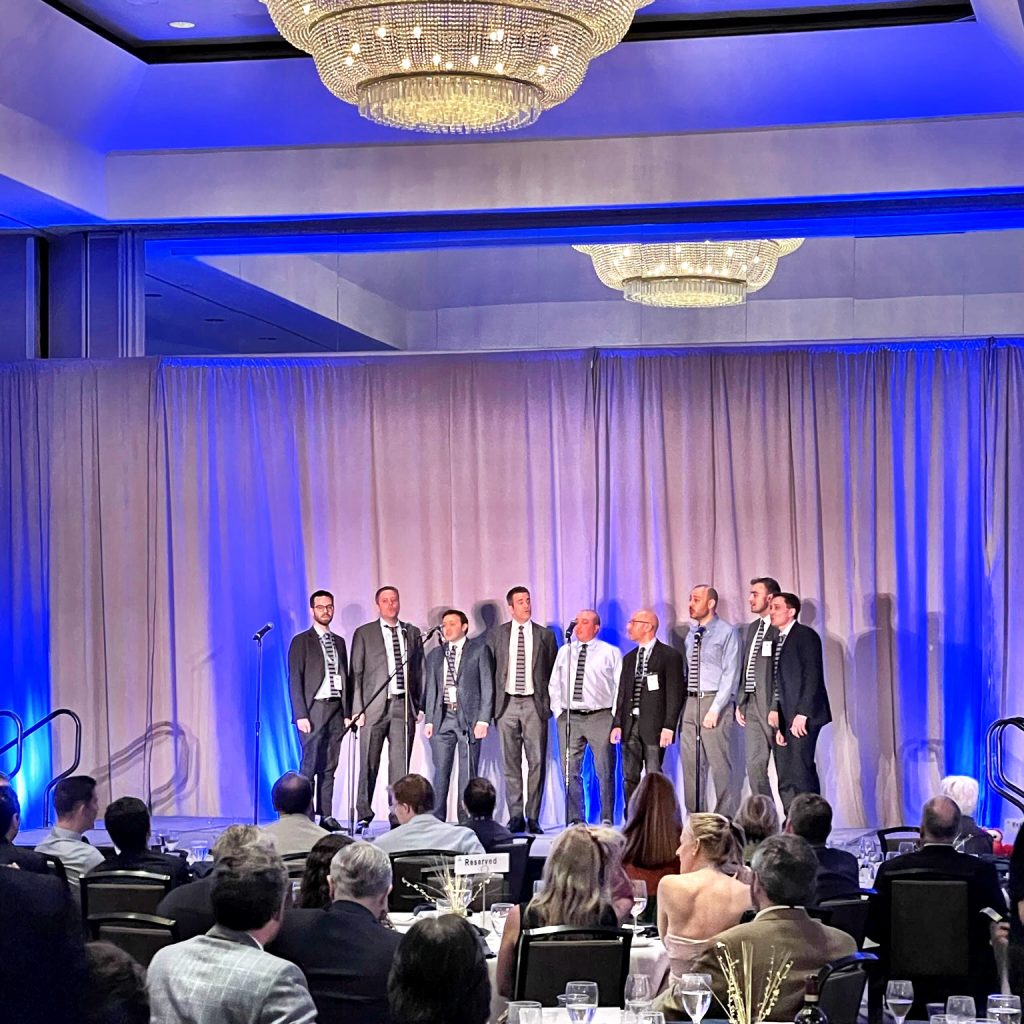 “Jeff was an absolute delight to work with for the Chimes 75th Reunion in Tampa. Shows are often made or broken by the talent of the emcee, but even more so by their generosity of spirit, and Jeff had all three in spades. He was patient, kind, and loving towards every performer, and consistently strove to put each talent in their best light. He was my rock throughout the whole process, and I couldn’t have done this show without him.

The moment he stepped on stage balancing a 10 foot ladder on his chin while the audience’s jaws promptly dropped to the floor, I knew we had a fantastic show on our hands. No matter how tight our schedule was or how little time we had to get the show on it’s feet, Jeff came in and brought the house down with his off the cuff humor, incredible physical comedy, and a killer introduction of each act so each performance was a success before the talent even stepped on stage. Few can attest to juggling a 9 pound bowling ball, meat cleaver and apple and living to tell the tale, and I’m convinced Jeff could do it for days without flinching, all the while keeping a smile on the face of everyone lucky enough to watch him in his element.

Jeff is one of those rare performers with that twinkle in the eye – his love of performance is infectious, his ability to connect with others is unmatched, and his comedy in action had the entire audience on their feet cheering. I cannot overstate how lucky I am to have had him as our emcee. He was a consummate professional, a brilliant talent, and an even better friend. I look forward to working together again someday – if only to see what other life-threatening inanimate objects he can toss into the air.”

It’s an ‘A Choired’ Taste, But Someone Had to Do It!

There’s a long-running joke that when you bring a spouse or partner to a Chimes reunion, you can expect that partner to run for the hills. After all, what do you expect when you gather 200 choir geeks into one room? All jokes aside, the 75th Anniversary Celebration was super fulfilling for me, especially coming back this time as the professional emcee.

I bounce between corporate clients and paid gigs all of the time, and while I am beyond thankful for them, nothing can beat the energy of long-time friends! I loved spending time with my Georgetown community and let my hair down with the Chimes. Now, if you so happen to require a professional emcee with a knack for 4-part harmony, you know just who to call!