What an honor to be featured in the CEO of Caesars Entertainment‘s weekly newsletter today.  Wow!  What a nice note.  I am humbled.  So grateful for my relationship with Caesars Entertainment.  I could not ask for a better partner in everything I am working toward.  Thank you, Mr. Loveman!

Over the years, Caesars Entertainment has been fortunate to enjoy relationships with entertainers who are eager to share the spotlight with organizations and charities that are close to their hearts.  Whether it’s Celine Dion hosting a fundraiser at Caesars Palace to support sickle cell disease research efforts: Penn Jillette – one half of Rio headlining act Penn & Teller – pledging his earning from appearing on Celebrity Apprentice to support Opportunity Village, a Las Vegas-based nonprofit that serves people with all levels of intellectual disability; or superstars Dion, Elton John and Jerry Seinfeld uniting in 2005 for a special performance to raise money for employees impacted by Hurricanes Katrina and Rita.  It is always inspiring to see these gifted performers volunteer their time and talents to raise awareness for important causes.

Recently, Jeff Civillico – the headliner at The Linq Hotel & Casino in Las Vegas whose act is a blend of physical humor, stunts, and juggling-helped raise funds for Special Olympics Nevada, an organization he’s supported for years that provides athletic opportunities to children and adults with intellectual disabilities.  And in keeping with the tradition established by many a Las Vegas performer before him, Jeff risked life and limb to do so. 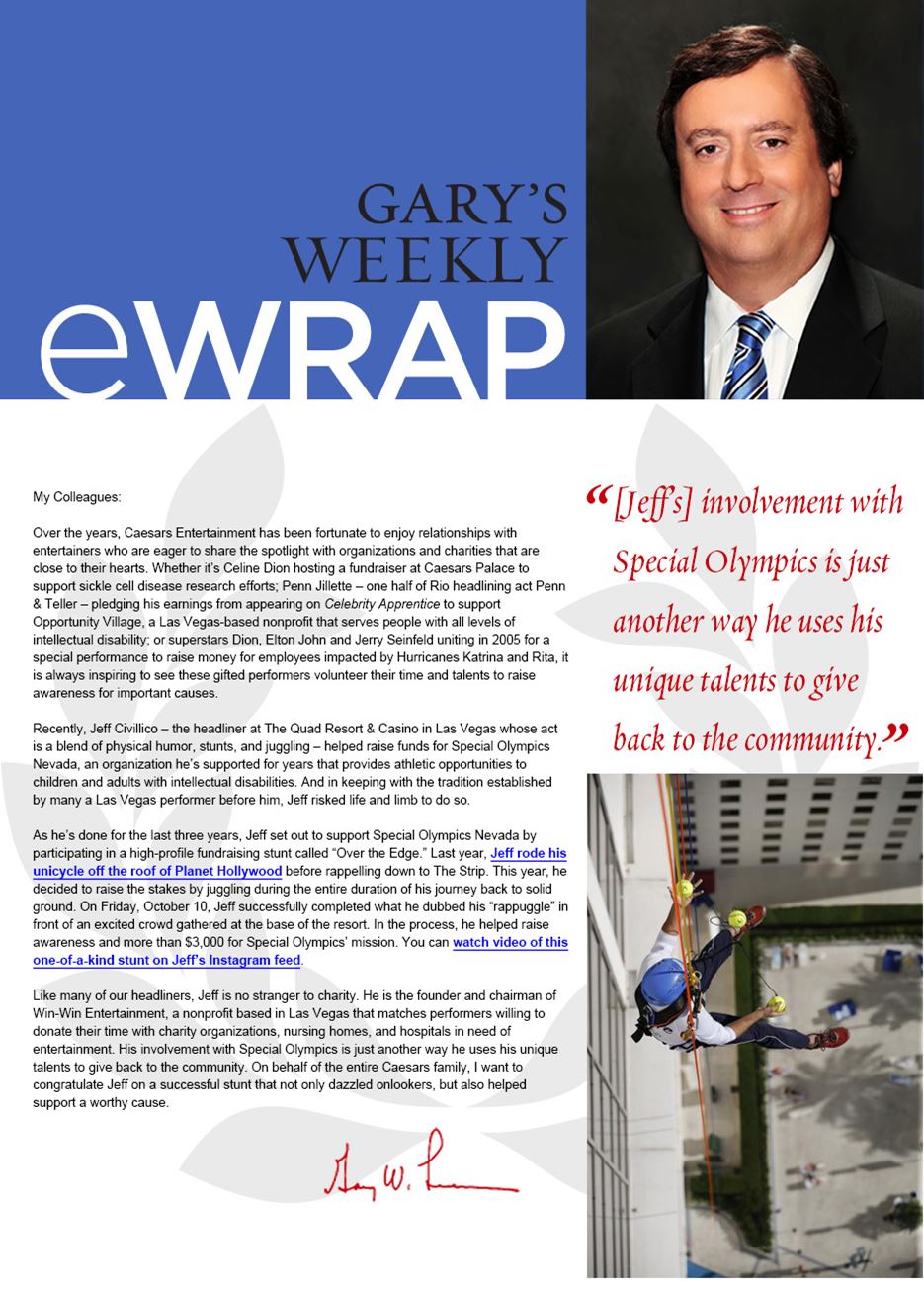 As he’s done for the last three years, Jeff set out to support Special Olympics Nevada by participating in a high-profile fundraising stunt called “Over lhe Edge.’  Last year, Jeff rode his unicycle off the roof of Planet Hollywood before rappelling down to The Strip.  This year, he decided to raise the stakes by juggling during the entire duration of his journey back to solid ground.  On Friday, October 10, Jeff successfully completed what he dubbed his “rappuggle” in front of an excited crowd gathered at the base of the resort.  In the process, he helped raise awareness and more than $3,000 for Special Olympics’ mission.  You can watch video of this one-of-a-kind stunt on Jeff’s lnstagram feed.

Like many of our headliners, Jeff is no stranger to charity.  He is the founder and chairman of Win-Win Entertainment, a nonprofit based in Las Vegas that matches performers willing to donate their time with charity organizations, nursing homes, and hospitals in need of entertainment.  His involvement with Special Olympics is just another way he uses his unique talents to give back to the community.  On behalf of the entire Caesars family, I want to congratulate Jeff on a successful stunt that not only dazzled onlookers, but also helped support a worthy cause.