Finding a Corporate Entertainer with a Clean Comedy Background

What to Expect from a Corporate Entertainer with Clean Comedy:

Picture this scenario: You’ve spent months planning your latest corporate entertainment event. You’ve meticulously arranged each and every detail, from the color of the cocktail napkins to the order your presenters will get on stage. The night begins without a blip, until your “corporate entertainer” hits the stage — and their “blip” is you needing to *bleep* half of their set.

Now, your company CEO is sweating in the front row. Janet from accounting is clutching her pearls, while Dave from marketing is livestreaming the entire event to his Instagram page… which brings your corporate event into the home of another 20,000 people. You already know you’ll be in trouble tomorrow morning, so you just reach for another one of those stylish cocktail napkins.

Don’t let a poor comedian drag down your next corporate event. Turns out, there’s a comedy style that won’t offend or embarrass anybody. It’s called clean comedy, and yes, it doesn’t have to be cheesy. From the heart of the Las Vegas strip to front and center at your next event, consider what to expect from a corporate entertainer who specializes in clean comedy.

What is Clean Comedy?

So, what is clean comedy, anway? Simply defined, clean comedy is a branch of entertainment that evokes laughter without involving any swear words, politics, or religion. A clean comedian never embarrasses volunteers who step on stage nor do they poke fun at someone’s appearance, sexual preferences, or ethnicity. Moreover, a clean comedian steers clear of “hot button” topics, such as trending politics, that could rile up or divide the crowd.

A clean comedy show is the type of corporate entertainment you could experience with the entire family (even with your little ones or overly strict grandparents!). A corporate entertainer who specializes in clean comedy often intertwines additional acts, including physical comedy like juggling or magic tricks, into their routine. When a clean corporate entertainer takes the floor, there won’t be a dry eye in the house — but you know everyone will be shedding tears of laughter, not of fear that they’ll be fired due to the raunchy comedian running the show.

The Difference Between Clean and Corny Comedy

Let’s get two things straight. One, if you hire a famous comedian or media personality as your next corporate entertainer, chances are, they will not tailor their material for you. By this, I mean that they likely will not censor their jokes for key phrases that could be offensive or embarrassing to attendees in the audience. Plus, they probably won’t spend hours researching your industry to craft material that resonates with your corporate crowd or involves your specific niche.

Here’s the second thing you need to know about clean comedy: It does not need to be cheesy. There’s a common misconception that “clean” comedy means corny or juvenile. But just because your corporate entertainer isn’t dropping F-bombs at the holiday party doesn’t mean their act won’t blow people away. In fact, it’s quite the opposite. A corporate entertainer with a clean comedy act can make everyone feel involved in your event, with high-energy jokes that simply leave out offensive topics or language.

How to Pick a Clean Comedian for a Corporate Event

Now that you know what sets a clean comedian apart from a regular comedian, it’s time to figure out what qualifies someone as the perfect corporate entertainer for your next event. Of course, an impressive roster of previous corporate events — both virtual and in-person — is a significant selling point. Practice truly makes perfect when it comes to clean comedy, so be sure to look for a performer with a dedicated corporate entertainment reel.

Also, take a look at their previous comedy experiences. Has this corporate entertainer ever headlined at a major venue or ran their own live show before? For instance, a corporate entertainer like myself had an entire decade on the Las Vegas strip. I was a Headliner with Caesars Entertainment at the iconic hotel properties The LINQ, The Flamingo, and The Paris.

Not to brag, but my clean, family-friendly “Comedy in Action” show still remains highly acclaimed:

Yes, my family-friendly (re: no swearing, no boob jokes, no politics) skyrocketed in Sin City of all places! If a corporate entertainer can work the crowd in a city that’s known for otherwise not family-friendly activities, you know they’re an automatic win for your next corporate event. Plus, corporate entertainers with this level of expertise are masters at researching your industry, learning your lingo, and relating to the members of your audience. 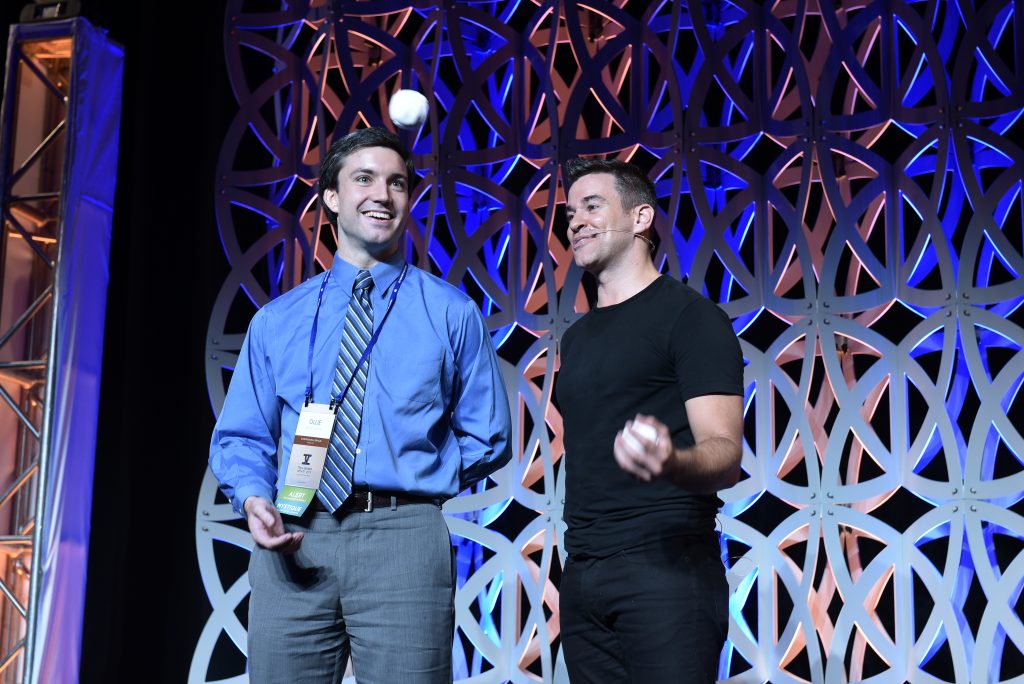 When you hire a corporate entertainer for your event, you want to be confident that you’ve selected someone who can make the entire crowd feel welcome. As such, their comedy act shouldn’t isolate team members or poke fun at your company mission. Truly, a corporate entertainer should generate laughter, not second-hand embarrassment — and that’s what clean comedy is for.

To recap, a corporate entertainer who offers clean comedy will:

If you’re on the hunt for corporate entertainment sans any risk, choose the comedian big businesses have trusted for decades: me, Jeff Civillico. Discover how to book me for your next corporate event today.