“Theology Alum Stars in One-Man Show Around the World”

Corporate entertainer Jeff Civillico was interviewed by student Brittany Coombs in advance of his Dean’s Luncheon Seminar on September 20, 2011.  Jeff says, “She was a pleasure to speak with, and I thought she did a fantastic job with the article.”

Variety entertainer Jeff Civillico (C’05) often gets asked if he “majored in juggling” while a student at Georgetown. The answer is no, of course, but he never forgets the big picture: the Hilltop is where he honed the life skills he needed to become a self-made businessman and successful performer.

Manager and promoter of a one-man show that bedazzles corporate and college crowds alike, Civillico knows there are those who see a disconnect between his elite alma mater and his career on stage. Some have suggested that if he had no plans for Washington or Wall Street, he should have gone to a school “that teaches acting on the same level that NYU or UCLA does,” he said. After all, it’s not every day that a Theology major from Georgetown becomes famous for escaping from a straightjacket while riding a unicycle, balancing a ladder on his chin, and juggling bowling balls, knives, apples, and plungers.

“But if you go to my website, you’ll say, ‘He’s the marketing director for this. He’s the membership chair for that,’” Civillico said. “So what I try to tell people is that Georgetown helps you with all the important stuff. Then you take those skills, and you apply them to whatever you do, whether it’s juggling or whether it’s law school. That’s why there’s successful actors, comedians [who have graduated] from Georgetown. Although Georgetown didn’t teach acting per se, it did teach [me] cura personalis: being a whole person, developing yourself as an informed, motivated, hungry go-getter,” he continued. “Underneath what I do on the outside—which is making you laugh and all the rest of it—to be successful, it’s the same formula.” 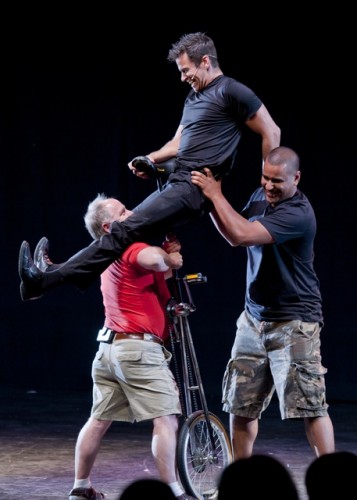 It’s a formula that Civillico has used his whole life. “I was always performing,” he laughed. “That’s what’s weird about me.” As a child, Civillico put on “little juggling shows” for his two grandmothers after dinner with whatever dishware was available. In competitions he juggled to music and eventually began putting comedy into his routines. Throughout high school, he entertained at theme parks, festivals, and fairs. By the time Civillico arrived at Georgetown, he had become so good at reading an audience and executing his high-pressure stunts—all while under the guise of a charming stage persona that is “an exaggeration” of himself—that he was hired by cruise ships to perform around the world during the school year.

When on land, he was heavily involved in the burgeoning Georgetown performing arts community, joining the Chimes, an all-male a cappella group, which he led during his senior year. He also created the Georgetown Performers’ Union, “which was my way of getting people who were interested in the arts together because there weren’t any theater or music majors when I was there,” Civillico said. “We managed to meet in Walsh and just kind of helped each other out. Whether it was somebody wanting to practice a monologue or somebody wanting to practice some stand-up, we just fed off each other.” On the side, Civillico also worked odd events around the city and hosted nights at DC Improv. 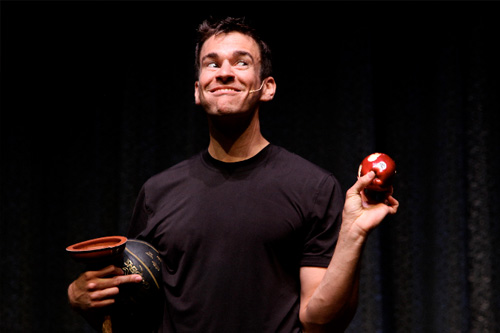 Even after years of dedication to his craft, Civillico stopped short of saying he decided to become a performer after graduation. Instead, he views his entrée into show business as a “progression” that was “natural,” an outlook he hopes can resonate with some young professionals who tend to value academic degrees over personal happiness.

“I don’t believe that things are as cut-and-dry today as they used to be, so I don’t believe that people decide to pursue x-y-z. I believe that it’s much more organic. You kind of shift roles and shift industries, and everything you do makes you more valuable for the next things that you do,” Civillico said. “Just make sure that you’re good at what you do, and you’re enjoying it. It seems like most employers today really don’t care that much about your major. They just want to see that you did well, you’re a nice person, and you work hard. Then you’ll see, things will take care of themselves.”