For the second time in the program’s 76-year history, the University of North Dakota (UND) Men’s Hockey Team hit the ice in Las Vegas — and I was there to greet them as the host of the Fighting Hawks Pep Rally on Fremont Street! Together, we led the quest to find the ultimate UND fan before the 2022 US Hockey Hall of Fame Game … but I think this Las Vegas entertainer might need to steal back the crown after all the Fighting Hawks fun we had this weekend!

One nail-biting game and 7,000+ amazingly dedicated UND fans later, here’s what you missed in Las Vegas!

In case you’re new to collegiate hockey, the University of North Dakota is home to the Fighting Hawks, an eight-time NCAA national champion men’s hockey team. North Dakotans take the Fighting Hawks pretty seriously, especially since the state does not have an official National Hockey League (NHL) team like its rival state, Minnesota, does.

This season, UND was selected to sponsor the 2022 U.S. Hockey Hall of Fame Game, an annual matchup that occurs in a rotating city each year. The Hall of Fame Game allows each fanbase an opportunity to travel for a weekend, and in this case, was able to give thousands of UND fans the chance to cheer on their team in the bright lights of Las Vegas!

In the days leading up to this prime-time destination game, UND planned a three-part event — part celebration, part pep rally, and part alumni hang out. While the program did have an in-area event emcee for the game itself, I was brought in as the host for the UND pep rally to inject the flair of a Las Vegas entertainer onto the Fremont Street stage. 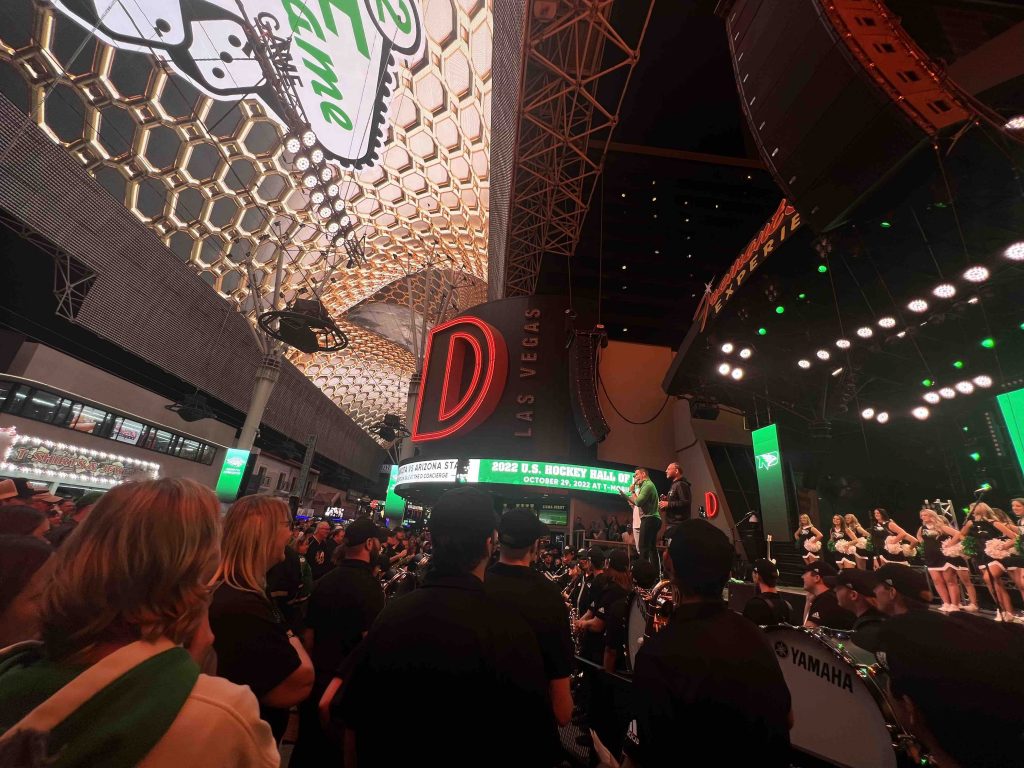 How This Las Vegas Entertainer Brought the Pep

Yes, you normally see this event emcee in a suit and tie strolling through the ballroom… and yes, I can adapt to lead a 7,000+ person pep rally where fans in facepaint take shots on stage. It’s called versatility, folks, and it’s the name of the game for us Las Vegas entertainers! For the University of North Dakota’s Pep Rally, I traded in my normal threads for a zip-up jersey and arrived with a set of custom engagement pieces that involved a ton of crowd work.

Take a look at how I remained quick on my feet on the opposite side of the corporate spectrum (and had a blast while doing it)!

Though the Fighting Hawks are far from a local team, the influx of 7,000 fans had Fremont Street jam-packed with UND fans. Before Saturday’s game at the T-Mobile Arena, I hopped on the 3rd Street Stage to kick off the weekend. Being a seasoned Las Vegas entertainer, I knew how to harness the event’s natural energy with custom engagement pieces that brought fans together on stage and set the tone for the Hall of Fame Game. 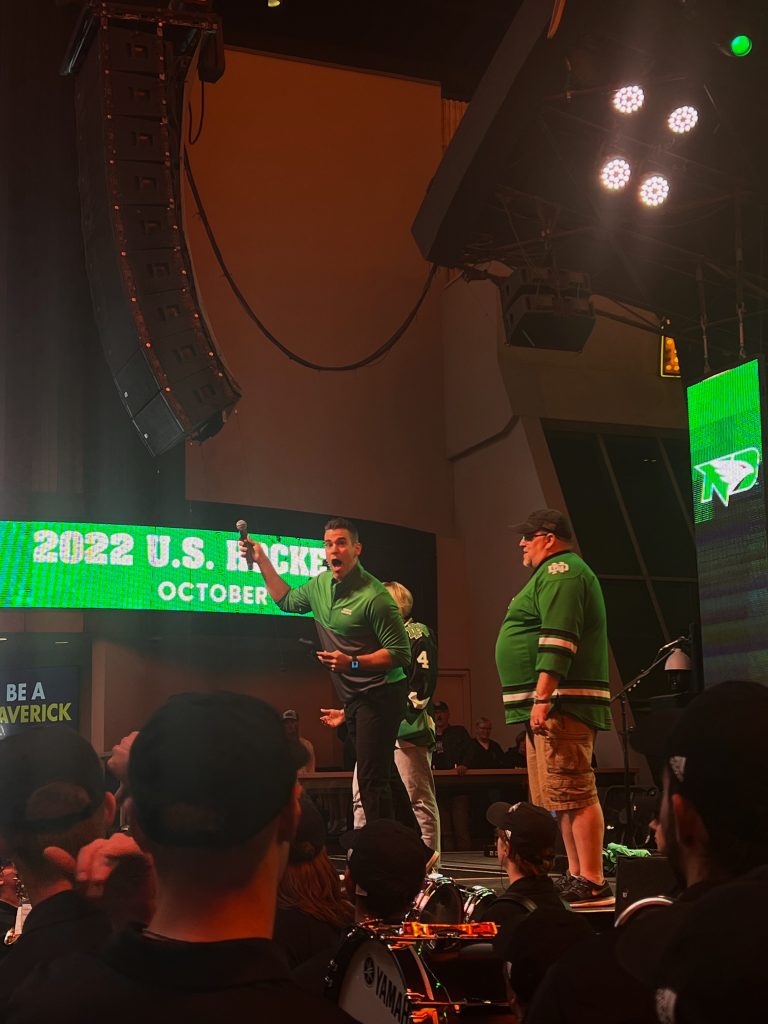 Speaking of custom engagement pieces, let me take a second to break down what I created for the University of North Dakota Pep Rally. We played a series of three games I had initially soft-launched at a recent Cox Communications corporate event. While the environment might have been completely different — a ballroom versus Downtown Las Vegas — this is where the understanding of tone as an event emcee came into play.

Once we capped off three rounds of games, the winners of each round were brought back for a final dance-off to crown the ultimate UND Fighting Hawks fan. Folks, this was where the evening really became interesting! I’ll be the first to admit there’s always a bit of … questionable … dancing on Fremont Street, but I’d certainly never seen dance moves like I did on the 3rd Street Stage. In other words, it was a total blast and a half to host!

From Coast to Coast Between Each Event

I have to thank Jody, AnnMarie, and the rest of the Ralph Engelstad Arena team for such a high-energy event. I just LOVE local events that bring the energy — and UND fans definitely made sure of that! While Saturday’s win might not have gone home with the Fighting Hawks, the University of North Dakota certainly left its mark on Las Vegas.

As the Fighting Hawks wrapped up their game at the T-Mobile Arena, I headed to the airport Saturday night to catch a redeye flight to Florida. I’m slated to entertain at the Ritz-Carlton Amelia Island, a venue I was recently at for the Million Dollar Round Table (MDRT) Top of the Table Annual Meeting, where my friend and fellow event emcee, Adam Christing, is hosting. The evening might have been busy, but traveling coast-to-coast is beyond worth it! 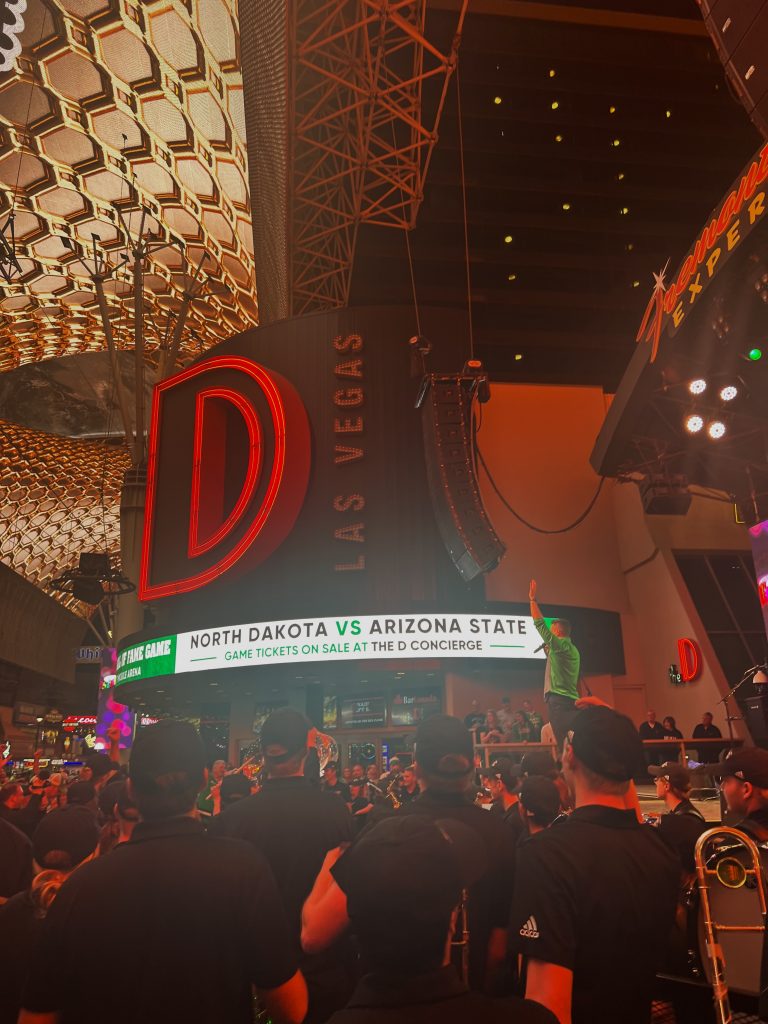 Need an Event Emcee to Dial Up the Energy?

Sometimes an event calls for a suit and tie, other times it calls for jeans and a jersey. Either way, I’m in! As a trusted event emcee, I leverage my experience as a Las Vegas entertainer and keynote speaker to dial up the energy at any occasion — whether it’s a multi-day conference, annual awards ceremony, training workshop, and anything in between.

If you need an event emcee who can bring the energy, be sure to send me a booking inquiry today to learn more.