“Jeff Civillico, Juggling Headliner in Las Vegas and What We Can Learn from Him”

by Niels Duinker, ezine.juggle.org, the official publication of the International Jugglers’ Association 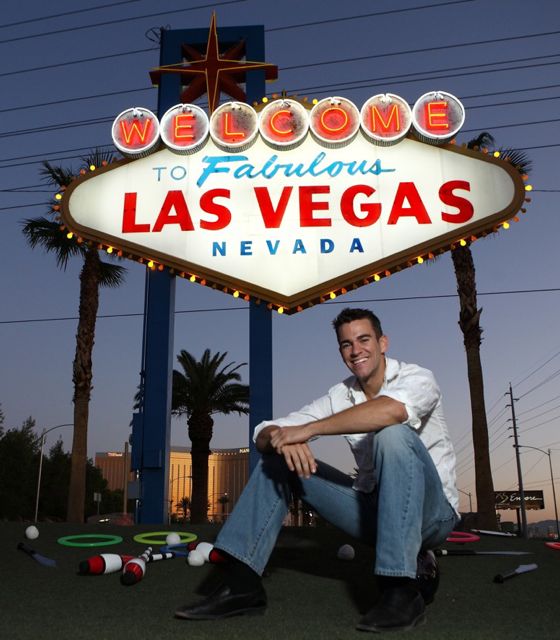 Juggler Jeff Civillico (29 years old) didn’t stop after winning his gold medal 14 years ago in the International Jugglers’ Association’s Junior Championships. There has never been a juggler in Las Vegas who was able to sustain a full show on his own. Jeff opened his own headliner show in the “Entertainment Capital of the World” just a few months ago and he’s already pulling in 200 to 300 people a day. His success is a testament to his steady work ethic.

If you have seen Jeff Civillico perform, you know that his show is full impressive juggling, friendly audience interaction, and insane amounts of energy. If you haven’t seen his show yet, watch the video underneath and if you get the chance make sure to check him at 2 PM at the The Linq Hotel Casino in Las Vegas.

ND: Jeff, you’re now performing as a headliner in Las Vegas. Could you please tell us a bit about what got you started at juggling and performing?

JC: When I was 11 years old, my family and I were visiting my oldest brother, who was studying at Harvard University at the time. Juggler Peter Panic used to street-perform in Harvard Square. When we were watching his show, I was randomly picked to be his volunteer. I strongly remember suddenly being in front a huge crowd. To me – It was one of those defining moments. Thereafter I got the “Juggling for Complete Klutz” book from my parents and I started practicing. I kind of had a really intense passion for it. In fact I started juggling all the time. Also I joined the Philadelphia juggling club and that is where I learned how to pass clubs, 5-ball juggling and some of the harder tricks.

How I got started performing – It first started when I did little shows at home for my family after dinner. But the big thing was when I started in high school as a first year freshman and we had to do a service project. I went to a special needs school where I did a juggling show. That was the first time I ever did a real show. It was a home for mentally disabled boys and young men, and after the project I continued to perform there regularly throughout high school. I soon started doing other charity shows as well at nursery homes, intercity schools, and such.

It is interesting since normally charities don’t have entertainment. It was a kind of an “easy” place to perform. It was really fulfilling, since they were so grateful to have me. They were happy to have me and I learned how to be in front of an audience and how to handle a crowd.

I would like to mention a non-profit that I started here in Las Vegas. It is called Win-Win Entertainment. It really is an organic development of how I got started with all this. I never stopped doing charity shows. Most performers don’t make time in their schedule to do charity shows. I try to do at least 1 charity show a month in the Las Vegas area. It could be for an orphanage, hospital, or a school. I started this non-profit because I got all these charity contacts now and they are looking for other entertainers. I knew who to recommend and refer.

ND: Performing as a headliner in Las Vegas is very prestigious. Not many jugglers have had their one full theater show, anywhere. What has prepared you for this adventure?

JC: I have a very strong work ethic, which I believe, comes from my family’s emphasis on education growing up. I went to Georgetown University, which always kept me motivated and taught me how to manage my time well.

In Las Vegas, there are so many shows. There is so much competition and without the name of being a Donny & Marie or a Criss Angel, it is really tough to have people in your theater. So you need to work hard!

Last night I got text messages from friends asking me to go out and party with them. But I was already in bed by 10 PM because I had been up since early morning writing articles, promoting my show, and performing in 2 different casinos. Now I am doing this interview for eJuggle. Thereafter, I have to head over to the theater. I just can’t approach it as “Hey, this is Vegas” and party!

It is not all as glorious as people think. I do my show 5 days a week. I also perform a spot in Nathan Burton’s magic show at the Flamingo Hotel Casino for 6 days a week. But the days off don’t overlap.  So I am performing now every day of the week.

To make it as a professional juggler at top level, you really need to have a wide variety of skills. You need to be able to juggle well and keep honing that. Also you will need to put new things in the show and be able to work the crowd.  You will need to deal with ticket brokers, edit your promotional videos, send newsletters, and write articles.

My dad taught me as a little kid: “Jeff, with everything in life, you will either have to learn how to do yourself or pay someone to do it for you. There is no way you will be able to know how to do everything. And the trick is managing what makes more sense for you to do yourself, and what make more sense to outsource.”

ND: What are you some of your future dreams?

ND: Do you have any tips for beginning jugglers that are interested in performing?

JC: Just start and get out there performing as soon as you can. I know so many people that are scared of looking silly and not going over well. Once you get over that, it is going to be so much easier. Go out and bomb a few times. Thereafter, you will realize that you’re still alive. And you’re still fine. Everybody has had a few horrible crowds and horrible volunteers. Stuff can and will go wrong. The sooner you get comfortable with that, the sooner you can move beyond it.

My tip would be to start performing for free and that goes back to my charity background. You can learn a lot from performing at charity events. And the best part? Even if you bomb they can’t get too mad at you– you were doing the show for free!

ND: For more information about Jeff and discounts for his show, visit www.jeffcivillico.com.