As I’ve navigated this crazy world, I’ve made it my mission to surround myself with kind, creative people. The type of people that will nudge you out of your comfort zone when necessary, yet still be there for you when comfort is the exact thing you need… like my good friend and fellow keynote speaker and corporate entertainer, Tim Gabrielson!

Tim and I go way, way back — in fact, it was Tim that convinced this Pennsylvania boy to move across the country to Vegas in the first place. Over the years, Tim and I have shared dozens of stages and thousands of laughs. More recently, the two of us joined the same MasterMind group with other corporate entertainers, like Scott Bloom and Jason Hewlett, to reflect on life and business.

This week, I wanted to use my platform to shine a spotlight on the magnificent performers and speakers in our MasterMind group, starting with none other than Tim. I hope you enjoy learning more about this ultra-creative powerhouse that I have the honor of calling my friend, and that you’ll give him a call the next time you’re in search of a hilarious keynote speaker. Let’s get started!

The MasterMind Group that Started it All

As a professional event emcee, a large chunk of your time is split between sitting at tables with people you met five minutes ago and sitting on an airplane with people you’ll never see again in your life. Though you’re around people all of the time, you can still feel pretty lonely — especially when it feels like you’re always the new guy in or odd person out at corporate affairs.

Of course, travel can be a large component of any career. However, as a corporate entertainer, my lifestyle doesn’t exactly match everyone else’s… except for those in my MasterMind group! Tim Gabrielson, Scott Bloom, Jason Hewlett, Wayne Lee, John Di Domenico, and I share a lane all of our own, and I’ve been so thankful for my relationship with them all to keep me connected.

“Jeff in two words: All in! Jeff never does anything halfway — it’s always 100%, he’s always in it. He gave me a book many years ago called “Who’s Got Your Back?” and I feel like that’s it. I know without a shadow of a doubt that Jeff’s always got my back.” — Tim Gabrielson

As we approach coming out of the COVID-19 pandemic and reflect on what a crazy time it’s been, these gentlemen have had a profound impact on me. They have made meaningful contributions on the creative front, the business side, and most importantly, personally. I’m beginning this spotlight series with a nod to Tim specifically, who has been a major contributor to all the above.

I met Tim over a decade ago in Las Vegas, where he soon convinced me to anchor my home base from the oceans with Disney Cruise Line to land on The Strip. We then both starred in the show “Amazed” at Planet Hollywood, which essentially solidified our friendship (if you’ve ever performed with someone night after night, you get what I mean).

Tim has the humor of a stand-up comedian with a hand as sleight as Houdini himself — but it’s the power of positivity he infuses in each and every performance that keeps clients coming back for more. If you’ve been lucky enough to hear Tim’s keynote, you might already know bits of what I’m about to share below.

If you haven’t heard Tim speak yet, strap in for a story that spans three decades. 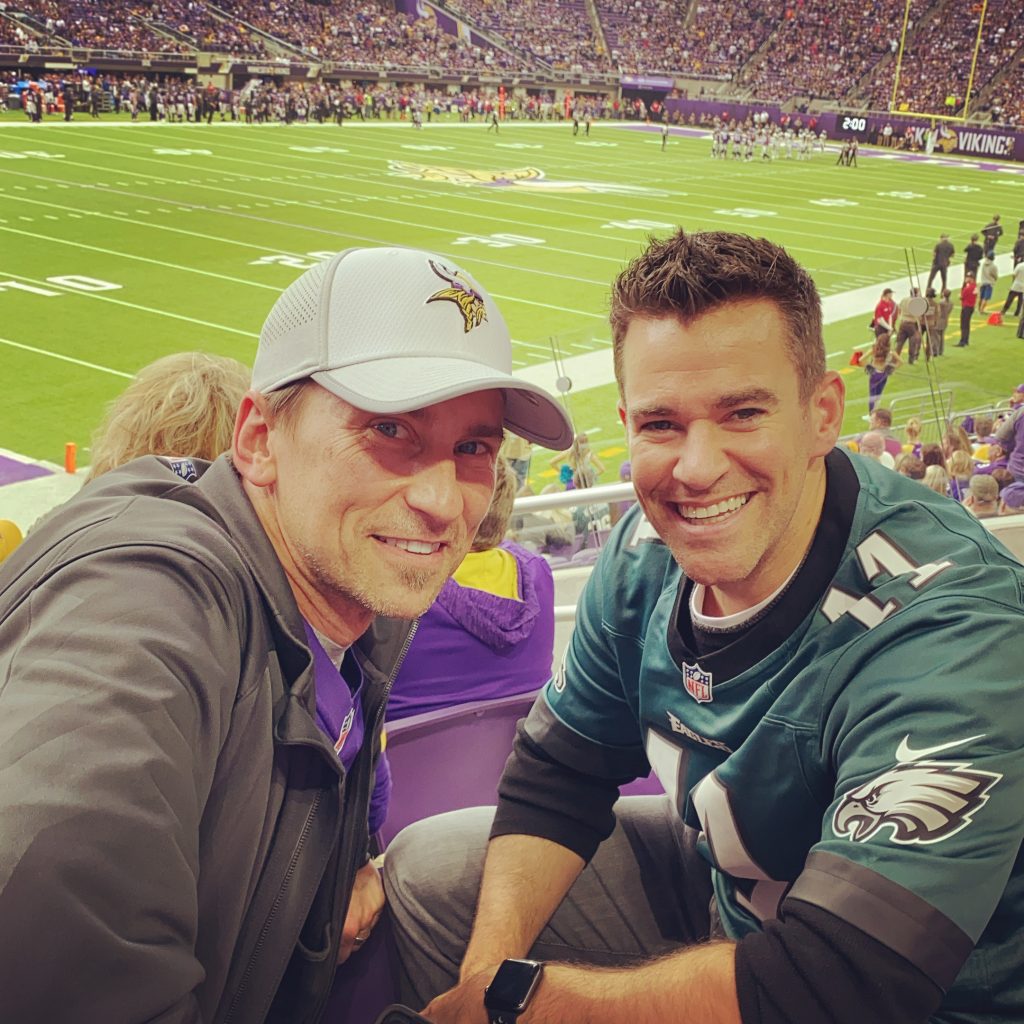 Early Magician Taught the Power of a Smile

For Tim Gabrielson, his life path was all but cemented by the man, the myth, the legend… Steve Martin. Well, that might be a bit of an overstatement, but Tim’s journey into learning magic did all start when he and his family took a trip to Disneyland at age 13 to see the old Merlin’s Magic Shop in Fantasyland where Martin previously worked.

When the family arrived at Disneyland, the shop tender showed Tim a trick which catapulted the young man into the world of magic. Tim loved that the magic happened directly to him, and he longed to create the same feeling for other people. So, young Tim did what any young person would do back in the day — he purchased the book “Now You See It, Now You Don’t! Lessons in Sleight of Hand” by Bill Tarr and practiced the whole car ride home. (Fun fact: Tim still has the same book!)

Though Tim’s magic experience began to grow, his days were darkened by a few exceptionally difficult years during middle school. That is until Tim was taught the power of smile by the school’s janitor. Each day, the janitor would say hello to young Tim, teaching him that only he could decide if his day would be good or bad. Tim learned he couldn’t always change his circumstances, but he could change his attitude in response to his circumstances.

Geared with a clear attitude and a love of magic and theater, Tim scored a job in an acting group at Mission Creek Theme Park in Hinckley, Minnesota. Tim quickly befriended Franco, the theme park magician, and began to train underneath him. By age 16, Tim took over as the house entertainer to hone his skills, and by 18, he was landing roles at local fairs.

Everything was smooth sailing, until one fateful show.

During one of Tim’s shows at age 18, he brought a man on-stage with large, bulky hearing aids to be his assistant. The gag of the bit was supposed to be that the magician assistant was never able to correctly answer Tim’s questions; however, that nuance was lost on the man on stage. Instead, the man felt like everyone was laughing at him — so, he began to cry on stage and ran off.

For Tim, who had been the victim of bullying himself, this experience was devastating. He could not believe that while honing his magician persona, he became the bully in his own story. From that day on, Tim vowed to change his stage attitude… which was right on time for a new 10-week gig at Harrah’s in Reno, Nevada. He would not make another person cry there!

Yet, shortly after, he saw a woman crying in his crowd. Had he hurt someone again?! Frantic, Tim approached the woman and learned that she had recently lost her husband. The woman told Tim that his show had been the first time she’d been out of the house and not thought of her grief. It was at that moment Tim realized he has the power to not only hurt people but to also help people.

Moving forward, Tim added a new bit to the end of each show, telling the crowd, “I hope for the past 20 minutes, I took you away from your troubles.” He continued adding to his positive message until he was asked to do his first corporate keynote speaking appearance. Fast forward to today and Tim has been performing and speaking for over 28 years, teaching his audience about the power of perspective and helping guide individuals to choose a more positive headspace.

The best way to describe Tim Gabrielson as a keynote speaker is transformative. Tim leverages his magic as a conduit for his message, becoming the most entertaining keynote speaker in the room while subtly igniting a shift in consciousness. Tim harnesses his talent for good, teaching audiences around the globe that though you can’t choose your circumstances, you can choose the attitude you use to approach your problems.

At conferences, he harnesses his own troubles and personal grief to help the audience navigate theirs. After losing his father, Dave “Gabe” Gabrielson, who was his closest friend, Tim created the acronym GABE to approach life with the right gratitude, attitude, behavior, and energy. Tim’s goal is to unify audience members under a shared mindset, so that once the show is over and the lights turn on, each individual is in the right mentality to take actionable steps forward.

Not to mention, Tim is also the corporate entertainer who’s the number one supporter of my charity, Win-Win Entertainment! Tim started the Minnesota chapter of Win-Win and led the first-ever official event not in Las Vegas. He’s done in-person and virtual shows for the kids, which means so much to me personally. When he’s not being the nicest dude ever, Tim is also helping the MasterMind group with endless creative troubles, constantly brainstorming new bits and gags.

Looking for a Keynote Speaker? I Know a Guy (or Five!)

With more than 18 years of professional experience under my belt, I’ve had the honor of meeting some of the most talented performers across the globe. I’ve also had the pleasure of learning that the most talented individuals are also often the most kind. Such is the case with my good friend Tim Gabrielson, as well as the other amazing entertainers in our MasterMind group.

If you’re on the hunt for a one-of-a-kind entertainer or keynote speaker for your next event, I know just who to call. Send me a booking inquiry today and we can discuss the perfect performer to add value and engagement to your upcoming conference or meeting.