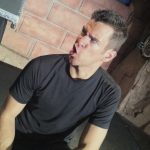 “I’ve been living in Las Vegas for close to 15 years now. During that time I’ve seen a lot of shows come and go.

Last week I had the pleasure of seeing Las Vegas Entertainer Jeff Civillico ROCK The House at Caesars Palace! Jeff performs a one man show. Literally, he takes the tickets, sweeps the floor, vacuums the rug and then gives his audience a show they will never forget!

Jeff has the “It” factor. That magical ingredient, that no one can quite describe, but they know “IT” when they see “IT.”  Well, Jeff Civillico has “IT”!

His one hour show is NON-Stop, High Energy, Gut Wrenching FUN!  He mixes his comedic talent with his juggling expertise.  Throw in a dash of improvisational interaction with the audience and you have a KILLER SHOW! He is truly, COMEDY in ACTION!

As I was sitting in the back of the room, I could see the ladies were absolutely loving him.  He’s got looks, charm AND he’s TALENTED! Then again, kids had fun too. And Yes, he has a kid friendly show!  I went with a group of friends and we ALL had a blast!

If you haven’t seen Jeff’s show yet, you owe it to yourself to have some Good, clean, FUN!

I think you’ll be hearing big things about this young performer.”

To Find Out Where Jeff Civillico is Performing Next, Go To His Website: http://www.JeffCivillico.com