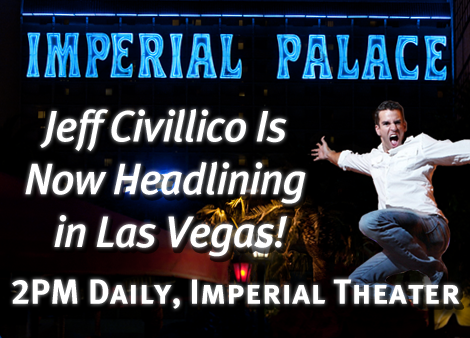 A few years ago I saw Jeff Civillico perform at a NACA (National Association of Campus Activities) event showcase somewhere…I don’t even remember the city… but I’ll never forget Jeff.

We didn’t meet at that time but last year a friend of mine introduced us (that friend is the incredible Preston Pugmire, the TOP booked act in America for NACA, unbelievable talent this guy is too!) and that is how I first officially met Jeff Civillico over the phone.

Long story short (too late!), I have helped Jeff get some corporate gigs with my awesome clients because Jeff is one of the great entertainers I’ve ever seen.  In fact I would go so far as to call him one of the greatest living entertainers in this world.  He always delivers, in a corporate setting, entertainment venues nationwide, or anywhere else for that matter.

In fact, he is one of the few on earth that could be standing on a street corner in another country and within 5 minutes have an entire crowd laughing hysterically and tossing money into a bucket.  Not glamorous per se, but certainly a great skill if things become economically challenging.

Luckily for Jeff Civillico life only gets better, as he is also one of the hardest working, most organized, driven performers I’ve ever met, and his focus has been to land a Headlining gig on the Las Vegas Strip since his career began a decade ago.

From cruise ships to restaurants worldwide, recently he has hopped from venue to venue throughout Las Vegas, including a steady gig within the  Nathan Burton Magic Show (which he still does daily), this is one of those “overnight sensations” that has worked for years in front of millions of people to become as successful as he is.

And now, Ladies & Gentlemen, it’s my honor to announce he has accomplished what so many set out to do, and never realize (including myself), and I am proud to give you Las Vegas’ Newest Headliner!

When I heard he landed this gig after a Showcase for the Caesar’s Palace management team I booked my airfare right away in order to be front and center to cheer him on for Opening Day.  It’s not every day you get to be a Headliner, and it’s not every day your friend becomes that Headliner.  And so, here is my review, as candid and honest as possible, of my friend and fellow performer, Jeff Civillico, Las Vegas Headliner!

Tickets were $14 at the door, doors opened 30 minutes prior, the line-up outside was about 80 people.  It seemed as if there were over 100 people in the theatre by the time the show started at 2 PM.

The Linq Hotel & Casino  is home to the “Human Nature” and  “Divas” shows and is the birthplace of the Las Vegas “Legends In Concert”, which started in 1983 in the Main Q Theater and ran for a few decades in this theatre (they are now at Harrah’s next door).

To see an Entertainer mingling with the audience prior to the show starting is always refreshing.  This only happens with the most confident and polished acts, usually reserved for the daytime shows.  Jeff’s show started at 2 PM with his own introduction, announcing it as Opening Day, welcoming us, and then running through the theatre to make his grand entrance with the audience clapping and cheering him on.  He sounds as if he’s crashing through the back stage and repeats our countdown of his introduction, and you are with him from go.

Built like a Sprinter, looks of a Hollywood actor, young (mid-twenties?), dark, handsome, shredded arms and abs, Jeff bounds onto the stage like “the wonderful thing about Tiggers” but in all black.  The energy from this performer would make a Saturday Night Live motivational speaker jealous and doesn’t let up once.  One-liners fly at you so quickly, and with every breath, that you will miss it if you laugh too hard.  With a quick Signature Move leg kick and the hilarious wedgie/snuggie pull that follows from the back side, Jeff is ready for his first volunteers.

Two men join Jeff on stage, no one planted, all improvised, and assist him in what I believe is the funniest opening of a show I’ve ever seen.  As Jeff brings out an extra tall unicycle the men are asked to hold it up while he gets on the seat, and this is when all mayhem and hilarity breaks loose.   I have seen him do this in 5 different settings and it’s funnier the more you see it because it not only displays physical humor, strength, agility, and improv all in one moment, but the genius that is Jeff is that these men actually remain standing while Jeff puts them in the most uncomfortable position of their lives.  On stage.  Under the lights.  People in the audience are screaming with laughter, choking on their own drinks, and being told by the maître-d not to record it on their cameras.  You have to see this LIVE to experience it, I’ve never seen anything so funny.

Eventually making his way up he now involves marshmallows to catching them in mouths to one-liners such as, “It’s OK if you didn’t catch the marshmallow in your mouth, just put it back in the bag…we’ll just use it tomorrow…that’s what happened yesterday…”  And so it continues for an hour of zaniness.

Each volunteer received either a DVD, Book, Juggling Ball Kit, or T-Shirt (with Signature high-kick on the front, wedgie-pull on the back), and no one was humiliated, just used effectively and to the audience’s delight.

Oddly not everyone seemed to enjoy the show.  Even Las Vegas Headliners must deal with the obligatory mad faced, arms crossed, grumpy old man on the front row, and for Jeff’s Opening Day he was lucky enough to have the sourest apple this side of Snow White’s step-mom’s family there.  This guy didn’t crack one smile, and Jeff played it so professionally, as if he was used to this sort of non-reaction, while the rest of us were bending over with laughter.

The routines included juggling features with white balls, up to 5, for which Jeff holds a record at 45 minutes straight, and claims he’s going to beat that record today.  Then bowling pins, along with a random audience member assisting in the back-and-forth juggling (usually reserved for juggling comedy duos, Jeff is capable of teaching someone how to do this on stage, pretty remarkable), as well as a darkened stage with glowing pins that is very impressive set to high energy music.

From inviting the 5 year old girl in the audience up to spin a plate on a stick, to Jeff juggling a bowling ball, sharp machete, and apple simultaneously as he eats the apple and throws the awkward & heavy bowling ball behind his back, to balancing on a large PVC pipe while standing on a plank of wood, moving back and forth like a surf board, all the while juggling and spinning hoops on his arm, to delivering the one-liners and great comedy commentary throughout, Jeff is simply amazing.  You can tell he has worked so hard to perfect a craft that is sometimes circus, other times art, often times beautiful and breathtaking.  He is a One-Man Cirque du Soleil act unlike anyone working The Strip.

The Show runs forth at a manic pace due to Jeff’s over-the-top charisma and personality, yet a few of the pieces drag even though he is doing things few people can do.  As he works on taking his act from “Showcase” in other Headlining acts (such as his contributions to the Nathan Burton Show) to the level of carrying a Show that is Headliner material for a long time, his act will become the kind you don’t want to end.  Some of the routines, even if amazing and impossible for regular people to do, have been seen before, or are good enough to see for a few seconds, up to a minute, but are often extended too long.  I would have liked to have known how he got his start, if his parents bought him the unicycle, who his heroes were in entertainment, why he does what he does.  It’s not like I wanted a life story, but I would have liked to have known more about him, as he gives so much of himself in the act, yet you don’t know anything about him in the end other than how funny and talented he is.

The final routine is an excellent closer, includes the first adult female on stage, and works beautifully as Jeff is tied up in a straitjacket for the famous Houdini escape.  As Houdini was suspended by his ankles for his challenge, Jeff ups the ante by getting out of the straightjacket after impossibly flinging himself onto a unicycle, hands tied behind his back.  The ensuing performance is marvelous and a feat so incredible, as he sways back and forth on one wheel, the music furiously pounding, and finally he releases himself from the stranglehold.  It is a wonderful way to end the show, even if it seems to come too soon after a great hour presentation, and has to go down as one of the most bizarre things you’ll ever see LIVE.

Jeff received a well deserved standing ovation, and audience members ran to the lobby to purchase his $10 per item merchandise, or $35 for all 5 items (which is what I bought).  He signs autographs, takes pictures, smiling and hugging everyone that comes by.  He is a true gentleman, a grateful performer, and as unique as they come because, although confident in his ability he is also truly humble.  He realizes this is a great opportunity, and treats the audience to all he has learned.  I can only imagine what he will be able to do as his act becomes more fluid, more ready for whatever bigger and better he can imagine.  Because for Jeff Civillico, the sky is the limit and he has proven, as the only working act with a One-Man Show like his on The Strip, he can take it as far as he wants to go. 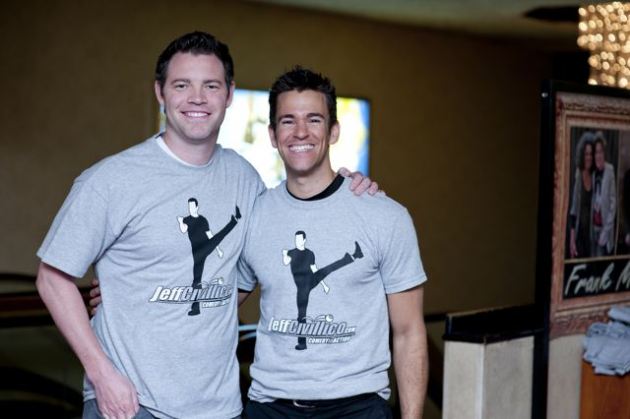 I am so privileged to call Jeff Civillico my friend. Check out the cool shirts!