Got the cover this month 🙂  Full article below: 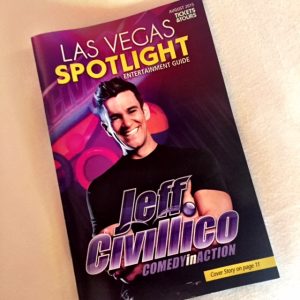 “Jeff Civillico blends physical comedy, action-packed stunts and world-class juggling with friendly audience interaction and insane amounts of energy in this side-splitting afternoon show. With a razor-sharp wit and a contagious smile, Jeff juggles everything from bowling balls to chainsaws to fire, balances a twelve-foot ladder on his chin and maneuvers a 6 foot-high unicycle. Kids and adults from the audience join Jeff on stage to take part in the fun, creating a hilarious and unique experience every show!

One of the youngest headliners on the world-famous Las Vegas Strip, Jeff has performed everywhere from Disney resorts to the White House, as well as on television, most recently starring in the Travel Channel show Vegas Strip Search. Jeff Civillico: Comedy In Action was voted one of Total Vegas Guide’s “Top Ten Things to Do in Las Vegas,” and is uproariously entertaining for all ages.

Don’t miss this rising star during his summer residency at the Flamingo Las Vegas’ Bugsy’s Cabaret in the heart of the Las Vegas Strip – a perfect way to take a break from the Las Vegas heat.

A 2-time winner of the Las Vegas Review Journal’s, “Best of Las Vegas Awards,” Jeff has won both “Best Bargain Show” (2014), “Best Family Attraction” (2015), and was most recently awarded “Entertainer of the Year” by VEGAS INC. An award winning clean comedy show in Las Vegas at an exceptional value—you can’t wrong!

“Jeff Civillico is a rising star on The Strip.” – Las Vegas Sun

The Reviews Are In!