Corporate Entertainer Robert Strong knows how to adjust to all corporate situations.

Robert Strong is a master corporate entertainer because of his openness to the world.

Robert Strong has been crisscrossing the world since 1985, entertaining audiences large and small,
young and old, formal and casual, and everything in between! Twice voted “San Francisco’s Best
Comedian”, he has appeared on every major television network, in all 50 states, in over 30 countries, 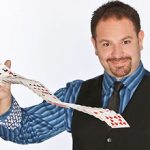 and for two Presidents of the United States.

No two Robert Strong shows are ever the same! He believes in creating a unique experience for each audience that is both interactive and magical. Robert’s enthusiasm and charisma leave audiences buzzing with excitement and memories that will last a lifetime!

It all started when young Robert Strong visited Baltimore. A magician in the Amphitheater mesmerized
him. At that moment Robert vowed to be the best magician ever. His parents considered therapy, but
magic lessons were cheaper.

Because Robert has worked all over the world, he has mastered performing for multi-lingual audiences.
His shows are very visual. Wherever Robert goes, he still carries that sense of wonder and passion
for magic that he first experienced as a youngster in Baltimore, but now he is the one doing the
entertaining!

Robert Strong will impress as your next corporate entertainer.