Nathan Burton was recently featured in the Kats Report in the Las Vegas Sun.  The article was written by John Katsilometes, published on May 15, 2012 and includes a nice mentioning of my new show at The Linq!  Check out the article on Nathan Burton below. 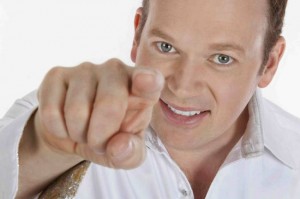 “The man who made the Microwave of Death a popular stage effect has extended his life at the Flamingo.

Comic magician Nathan Burton, whose signature trick is to climb into an oversize microwave and reappear as a charred black man, has secured a two-year extension at the Flamingo Q Theater beginning Memorial Day weekend. A 4 p.m. act since he opened at the hotel in April 2008, Burton is adding 7 p.m. performances Sundays and Mondays. He also will fill in during the evening when showroom headliners Donny & Marie are away touring, including a two-week stint beginning June 21.

Burton, whose show is open to all ages (tickets are $34-$44, absent fees), has been a performer in Las Vegas since he was one of the acts in “Showgirls of Magic” at San Remo in 1999. He said the change in schedule will allow him to expand the act artistically and reach new fans.

“I’ve wanted to grow, and the hotel wanted me to stay,” Burton said in a phone interview today. “This gives me a chance to branch out, which I have wanted to do for a long time.”

A performer on “The Entertainer” on E! and NBC’s “America’s Got Talent,” Burton also is producing an new afternoon show at The Linq starring juggler Jeff Civillico, a featured performer in Burton’s show who begins his afternoon run at I.P. on May 26.

Burton is famous for juggling, managing his family-run entertainment operation, performing such stunts as locking himself in a glass box for a week with seven showgirls and performing three shows a day earlier in his career.

But Burton seems to be settling down a bit, making a significant change in his personal life. He and his girlfriend, Amie Jordan, are engaged. Burton proposed to Jordan, a dancer in his show, two weeks ago at Restaurant Guy Savoy at Caesars Palace. The site has not been decided, but the date has: Sept. 7, 2013. Burton offered no sleight-of-hand in his thoughts about the proposal, saying simply, “It was very romantic.”

Be sure to check out more about the Nathan Burton Comedy Magic Show and my new show at The Linq!