On the Cover of “Today in Las Vegas” Magazine! 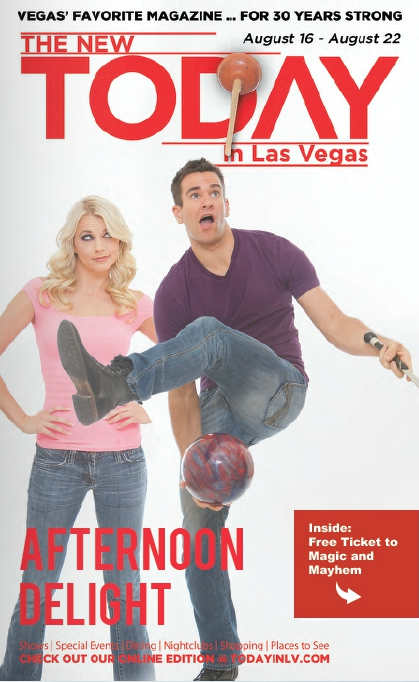 “Comedian. Juggler. Master of the Ridiculous. If you’re looking for a way to while away the mid-day heat, spend some quality time with “Jeff Civillico: Comedy in Action,” appearing afternoons at the The Linq showroom. Vegas-based Civillico brings his copious amounts of energy, hilarious audience interaction, and an unmatched juggling and balancing act to each entertaining performance. And it’s truly a one-man show, no assistants, no dancing girls, no distraction from the charismatic main attraction himself. His chemistry with the audience can only be seen to be believed. Every show is different employing his creativity, originality and uncanny ability to roll with the outrageous punches. Civillico’s natural talent means he does not have to fall back on dirty jokes and off-color commentary to entertain. Take your grandparents, take your kids, all ages will love it.

With self-deprecating charm, this “Juggling Juggernaut” acknowledges that an afternoon show that’s rarely half full may not put him on the fast-track to stardom. Some may recognize him as the past, and current, guest star of “Nathan Burton’s Comedy Magic Show at The Flamingo,” who is also the producer of “Jeff Civillico: Comedy in Action.” “Instead of sending people to other shows, I might as well (produce) my own show,” Burton explains. “People want fun, family stuff to do. We’re giving them more options.” From a 12-minute guest appearance to a full-length show of his own down this famous street, it’s not a bad way for Civillico to build his brand.

Audience participation is the key to each show’s success. From balancing ridiculous items that are handed to him, to using two brawny men as a ladder to hoist him onto his towering unicycle, he counts on the participation to make each show personal and memorable. Think you got juggling skills? You may get your BIG BREAK when Civillico chooses you. If you expect some reprieve from embarrassment in the back row, don’t bother. Jeff feeds on the reluctant and uses that for his comedic fodder. Don’t worry; even the most uptight audience member will be a die-hard fan at the end.

Other notable accomplishments? Creator of Win-Win Entertainment, a non-profit organization that matches professional entertainers willing to donate time and talent with eligible, approved charities nationwide. He broke a world record for bungee jumping on his unicycle off a cliff in New Zealand and raised more than $5,000 as a team member of “Athletes for Special Kids” by joggling 26.2 miles in the Disney Marathon. You read right, joggling. While jogging the marathon, Civillico was also juggling! Ridiculous.

As the youngest of three boys, Civillico credits his first love of entertaining to a street juggler in Harvard Square he saw at the age of seven. Showing up in his checkered vest to heckling and soon-to-be-dispersed crowds, Civillico learned quickly that you have to interact with an audience and make them laugh to keep them engaged. After years of practice and performing, Civillico took home the gold medal in the juniors division of the 1998 International Jugglers’ Association competition at the age of 15. He explored acting, singing and dancing throughout his youth but returned to juggling in High School, and used it as a tool to develop his unique brand, “Comedy in Action.” And I’m sure he got a couple of girls along the way.

Enjoying every minute as a headliner in Las Vegas, Civillico thrives on the chance to just be his ridiculous self, and I’m sure audiences agree, they wouldn’t have it any other way.”