What do you get when you combine four Las Vegas personalities, four incredible charities, and the one and only Vanna White? A charity event to remember! In case you missed it, I had a total blast at the Global Gaming Expo (G2E) yesterday, where global gaming leader IGT hosted a Wheel of Fortune Spin & Win Tournament that featured your’s truly (and more importantly, Vanna White!).

Fortunately, the remaining $5,000 was split among the other participants and donated to their preferred charities. I say fortunately because, well, your favorite professional emcee came in dead last! But still, I got to meet and chat with Vanna White, see old friends and make new pals, and pick up a $1,000 giant check for Win-Win Entertainment… so, I would say it was a good day!

A Wheel of Fortune Anniversary to Remember

The popular game show Wheel of Fortune, where contestants guess hidden phrases by selecting one letter at a time, has been on air since January 6, 1975—making it the second longest-running game show on the air today, rivaled only by The Price is Right. Most Americans are familiar with host Pat Sajak, who’s been at the helm since 1981, and hostess Vanna White, who’s been a staple since 1982.

Though both Pat and Vanna are creeping on their 40th anniversary with the show, that’s not exactly the anniversary we celebrated yesterday. Rather, we were celebrating the 25th anniversary of Wheel of Fortune Slots! As a Las Vegas professional emcee, I’ve spent my fair share of time in casinos across the strip, and let me tell you, those slots are a hit.

In addition to the slot-iversary, the Global Gaming Expo (G2E) was also the international debut for  IGT’s Wheel of Fortune Spin & Win Tournament game and a whopping 13 other Wheel of Fortune-themed casino games and Wheel of Fortune digital games. The event truly gave a lot for us to celebrate—including a donation to a Las Vegas charity! 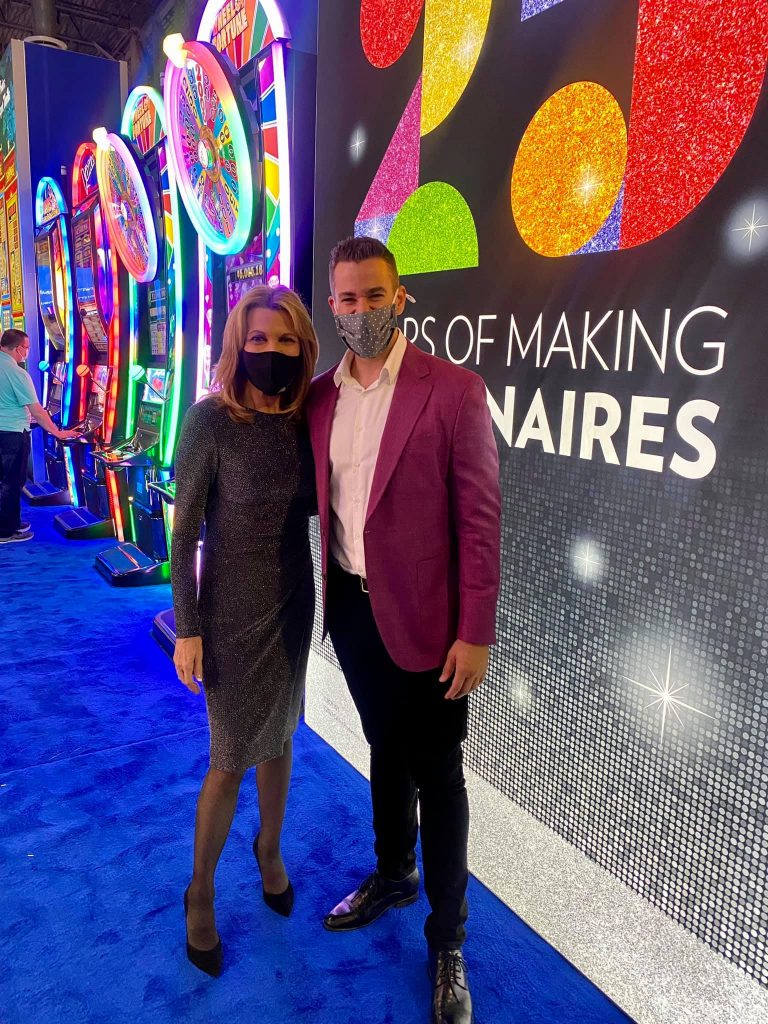 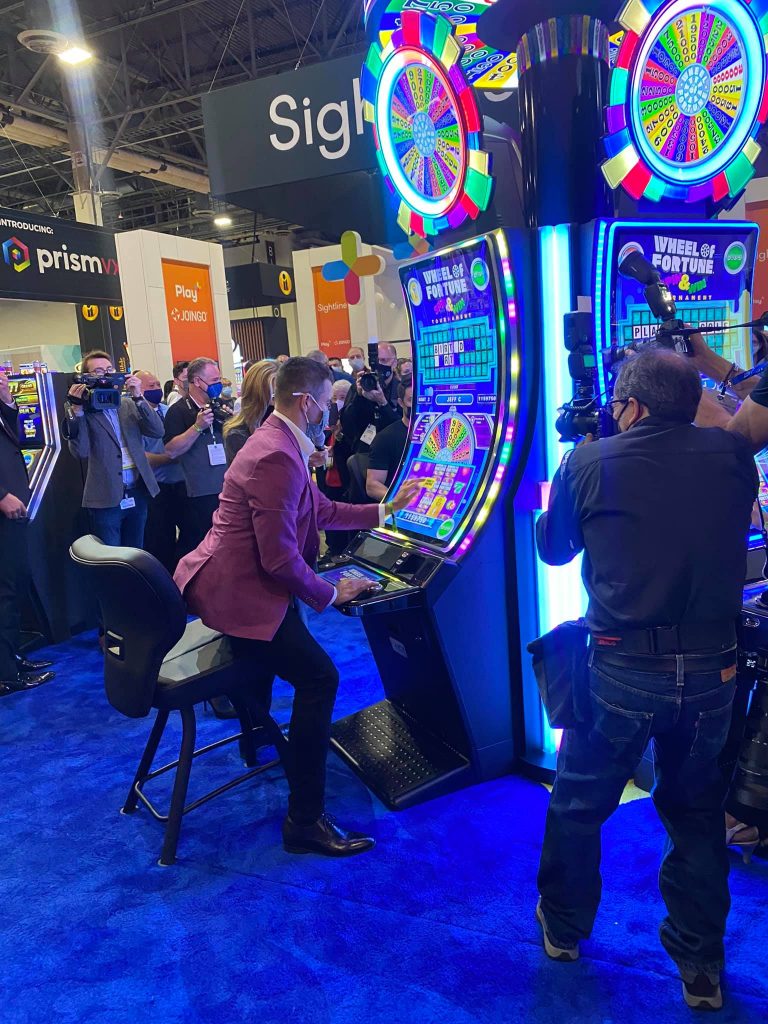 One of the best parts about yesterday’s charity event was the wonderful people I got to play alongside. I knew most of my fellow contestants from around the Las Vegas scene and was stoked to join them in an event I knew would benefit the Las Vegas charity of our choosing. Let me break down the contestants and who they played for!

Jonathan Bennett, actor and TV host. Jonathan was a joy to be around even though he totally kicked all of our butts at the tournament! He was playing for The LGBTQ Center of Southern Nevada and secured the charity $10,000. Though I hadn’t met Jonathan in the past, I knew his husband Jaymes from our times hosting together on Channel 13. Really awesome people!

Mark Shunock, founder of Mondays Dark and in-arena announcer for Vegas Golden Knights and Las Vegas Raiders. I’ve had the fortune of becoming good buddies with Mark over the years and it didn’t surprise me at all to see him duking it out for his Las Vegas charity Mondays Dark.

Michelle Johnson, vocalist and First Lady of Jazz in Vegas. Michelle can really tear the house down with her vocals and is just as kind as she is talented. It was fantastic to catch up while at the charity event, where Michelle kicked my butt. She was playing for the Las Vegas charity.

Jeff Civillico, Las Vegas performer, professional emcee, and corporate entertainer. That’s me, folks! I was proud to represent my charity, Win-Win Entertainment. Anything I can do to support Win-Win is always a pleasure for me and it was even better to be able to benefit the Vegas community at large with three of my fellow performers… even in last place!

A Change of Pace for this Vegas Professional Emcee

The Wheel of Fortune Spin & Win Tournament was truly a night to remember. It was a welcome change of pace for this Las Vegas professional emcee, since I’m usually the one leading these types of events. Instead, I got to show up, hang out, and enjoy! Better yet, we were able to have none other than Vanna White lead the show—which was a win-win for everyone involved!

It was also great to see conferences making their way back to Las Vegas. The Global Gaming Expo was proof that we’re slowly but surely returning to normalcy (or whatever “normal” looks like in Vegas!). Overall, I’m just thankful to be included in such a cool event with such amazing people and charities. We even got some press coverage to further boost our charity efforts! 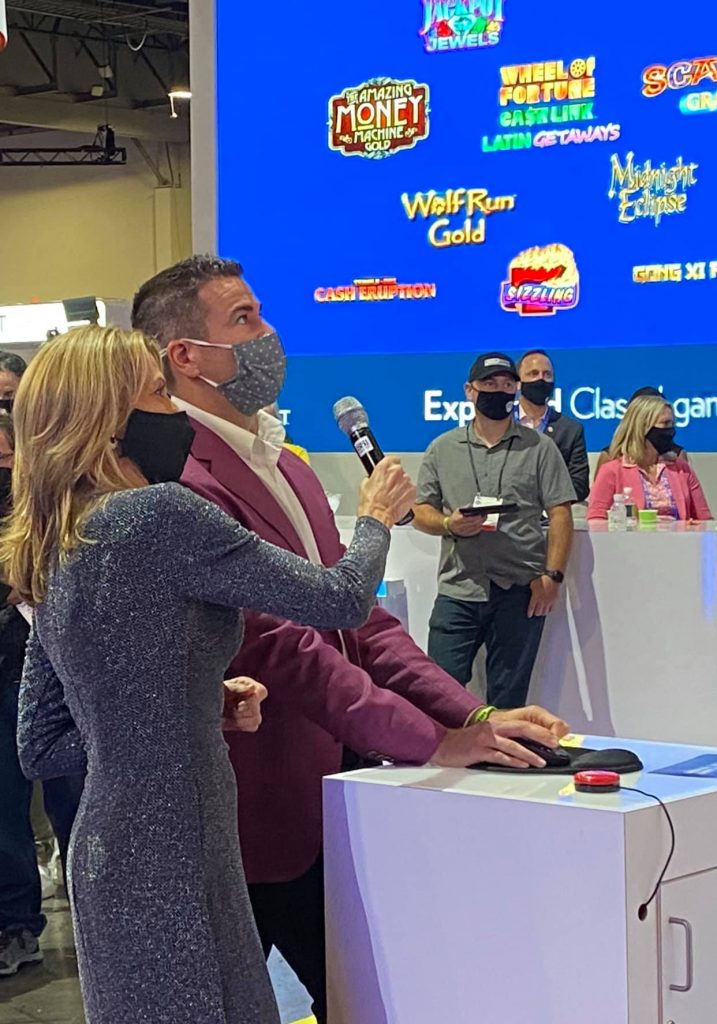 Upcoming Charity Event? I Can Help!

Do you have an upcoming charity event that you want Vanna White to host? Cool! Unfortunately, I can’t put you in contact with her agent. Fortunately, you can send me a booking inquiry instead! I know, I know… I’m no Vanna. But with more than a decade of Las Vegas entertainment experience and countless charity fundraisers under my belt, I know I can take on the job.

Contact me today to discuss your next charity event and how we can make it the best one yet!