Professional Emcee Returning to the Strip for Limited Time

Hello, Las Vegas! It’s been a while since I’ve been able to greet a crowd that’s just been ushered in off The Strip — and folks, I cannot wait! I’m excited to return to the Las Vegas Strip to perform 10 shows at Excalibur Hotel & Casino from August 3 to August 7. I’m filling in for my pal Mac King, with 1 and 3 p.m. shows daily.

But Jeff, why are you taking a break from your typical professional emcee and corporate entertainer duties, you ask? Well, when Mac King asks you to fill in, you do! My role as a professional emcee and corporate entertainer surely isn’t going anywhere. However, I couldn’t miss out on this opportunity to be back on the mainstage where my career first exploded nearly 12 years ago.

Learn more about what to expect from my upcoming show at the Excalibur Hotel & Casino and why I simply couldn’t say no to my good buddy Mac.

The Man, the Myth, the Magician: Mac King

Let me start off by saying that I’ve always respected Mac King, both on and off stage. Mac is a legend in town, and for good reason. He has the longest running magic show in Las Vegas — hitting the mainstage longer than other famed magicians like Penn & Teller and David Copperfield. Not only that, but Mac also has the longest running magic show in the entire United States. Pretty big deal, right?

Well, get this: Aside from his time-defying magic tricks, Mac is also continuously finding ways to give back to our community. Back in the day, when Mac and I worked next door to one another on the Vegas Strip, we worked together on a five-day event called the Showbiz Academy. The Showbiz Academy was an immersive experience for high school students interested in learning about the creative and business aspects of show business from top Las Vegas entertainment professionals.

The event featured private performances, keynote speeches, question and answer sessions, panel discussions, and hands-on workshops from major industry players in Las Vegas — including my buddy Mac! He absolutely crushed it with his master class on magic and was the perfect person to help lead the event. So, it was a no-brainer to also tap him in for events with my Las Vegas non-profit, Win-Win Entertainment! Mac has been such a wonderful addition to our virtual shows, but it’s no secret we’re both stoked to return to live events.

The Excitement for Live Shows is Building…

Finally, right?! After completing tons of virtual events over the past several months, it feels so, so good to return to a live audience. My last public show on The Strip was at The Paris Hotel & Casino on December 18, 2019. COVID-19 struck the U.S. in January, and by March, all shows on The Strip had gone dark. Personally, my last live, in-person show was March 17, 2020 for MFK Haiti in St. Louis — so to say I’m excited about this is a severe understatement. I cannot wait!

“I’m so excited to be in my new home at Excalibur Hotel and Casino. I had already booked a week of out of town work in August that I couldn’t cancel. I feel bad about missing an entire week so early in my run, but knowing that my pal Jeff Civillico will be there filling in for me holding down the castle in my absence makes me feel way better. I know the audiences will be in good hands with Jeff and his amazing, high energy, family-friendly show.” — Mac King

In case you missed it, before I segued into being a full-time professional emcee and corporate entertainer, I had my own show on the Vegas Strip for nearly a decade! Going back to the main stage is probably one of the most “normal” things I’ve done over the past several months, if we’re being honest. Getting my gear together, polishing my act, and heading back to The Strip — even just for a week — feels like a breath of fresh air.

… And My Professional Emcee Schedule is Getting Full!

Breath of fresh air aside, there’s no breathing room in my schedule anytime soon! I’ll be the professional emcee for a three-day conference right before heading back into Vegas for my week covering for Mac. Fortunately, my time spent back on The Strip means my friends, colleagues, and community partners can come see what this former self-proclaimed carnie turned corporate entertainer can really do!

Anyone that knows me knows how much I love my community. I am truly so thankful for this short break from corporate and private shows so my Vegas community can come laugh with me at a public show again, even for a few days. Plus, I consider it a true honor that THE Mac King reached out to ME to cover his show while he’s out of town! There’s really not much else I could’ve asked for.

So what are you waiting for? Get your tickets today! I’ll see you at the show! 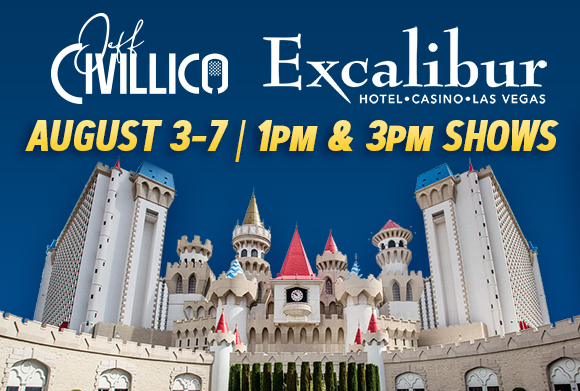