Roasts are always a great time, so I was happy to attend the recent Showbiz Roast of a Las Vegas legend, former mayor Oscar Goodman.

Some of the speakers took it a little easy on the mayor, but that might be because of his reputation as a “mob lawyer.” Everyone got in their jabs, though, all in good fun.

The event was doubly meaningful to me because it was produced by my friend Andy Walmsley, who also designed the People’s Arch used in my show. Yes, Andy’s a man of many talents! 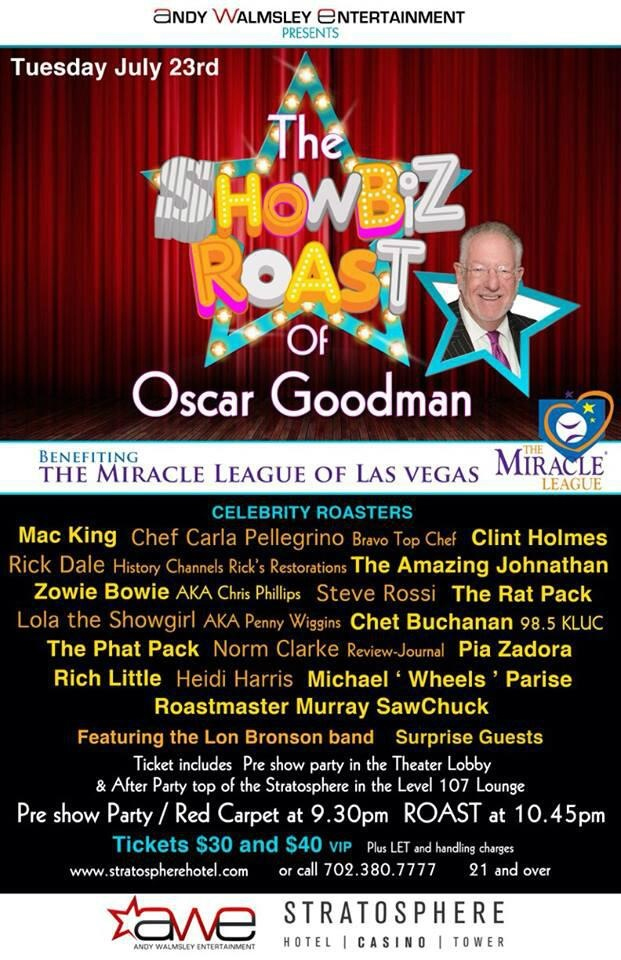 This was the second “Showbiz Roast,” the first being for longtime Las Vegas lounge performer, Chris Phillips (known as Zowie Bowie).

Among the luminaries was also a comedy icon, Rich Little. It’s surreal to get to meet people who have been able to succeed in show business for decades, and who helped set the bar for comedy.

Entertainment for the evening included Clint Holmes and The Phat Pack, who perform at The Plaza, downtown.

These roasts are for charity, and the mayor chose the Miracle League of Las Vegas to benefit from the night’s proceeds. As you could probably guess from my charity Win-Win, I’m always up for helping other worthy Las Vegas nonprofits!

The next roast is Oct. 4, 2013, and will be for my friend Frank Marino, of Divas Las Vegas, also at The Linq. That should be the craziest roast yet!