Start the Year Strong with a Virtual Event Emcee

The presents have been opened, the ball has dropped, and it’s officially the New Year! Well, what now? One look around the office or at your team’s collective faces on Zoom will all reveal the same thing: People are tired! What’s often considered the most magical time of the year is also often the most exhausting for parents, party planners, and present-openers alike.

It’s no secret that your employees are likely tuckered out from one whirlwind of a holiday season. Why not start the year strong with a winter-themed virtual event? Pack in one more holly-jolly event for the folks that need it most — your team! Even better, they won’t even need to leave the comfort of their own homes to join in on the virtual fun with teammates.

Here’s a quick look at how to start the year strong with a virtual event emcee.

I would personally like to dispel the idea that a holiday show must occur before January. If we’re being honest, we all know that December is one of the busiest times of the year. There’s so much going on in all directions — businesses are wrapping up Q4, and if they’re involved in e-commerce sales, they’re likely working harder than Q2 and Q3 combined.

Beyond what goes on at work, employees are also slammed in their personal lives. Once they log off from their day job, they’re hard at work planning their own personal events, taking care of holiday shopping, and indulging in some much-deserved relaxation. Amid so much activity, it can be easy for the idea of a company-wide holiday event to fall through the cracks.

However, just because a December event didn’t work out, doesn’t mean that a January party should be out the window, too. On the contrary, January can actually be one of the best times to host your holiday show! With everyone winding down from the excitement of the New Year, January is the perfect time to boost company morale and start team-building with a virtual event emcee.

Team-Building and a Company Refresh in the New Year 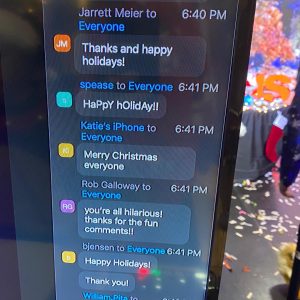 There’s a high probability that your company is overdue for a virtual team-building event. That’s not me judging — it’s just fact! Between a global pandemic and a busier-than-ever holiday season, most organizations have been focused on keeping employees healthy and happy, not planning how to strengthen their working relationships. Fortunately, team-building can help with all of the above.

A virtual team-building event allows your employees to engage with one another outside of their typical roles and responsibilities. When you break down these barriers and allow employees to mingle as equals and not employees, you help forge strong relationships that boost team productivity and job satisfaction. Better yet, you all get to have some serious fun!

A ‘start the year strong’ virtual event can be thrown together quickly, especially if you partner with a virtual event emcee with access to a professional studio. I always work with Show Creators Studios here in Las Vegas as my virtual event production company, and together we can put on an engaging show that helps teammates learn new skills and forge new connections instantly.

Feeling like it’s too late for a holiday show? Partner with a virtual event emcee who can handle every single detail, from the run of show to the overall theme of the event. Last-minute openings for a holiday show are still available — take a look at how a virtual event emcee like me and Show Creators Studios can provide endless possibilities for high-quality entertainment. 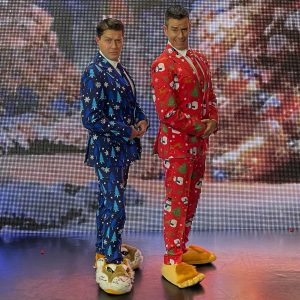 A major perk of being a professional event emcee is working with awesomely talented individuals, like my good friend Rob Ferre. Rob is a DJ extraordinaire and the ultimate hype-man, and together, we’ve completely customized holiday events (even with extremely short notice!). Our most recent event was a ‘Virtual Holiday in Vegas,’ which was one of my most fun virtual emcee jobs yet.

When I say we customized everything, I do mean everything. We started with themed contests and prize wheels, even hosting a hysterical Ugly Sweater contest and in-home scavenger hunt that included items like elves, eggnog, and mistletoe. We capped off the night with holiday movie trivia and sing-alongs, though every single entertainment piece is totally customizable for your event.

Have a company logo that you love? Broadcast on the video wall in my virtual event studio! Want every activity to include your company colors? We can do that, too! Working with a virtual event emcee means every aspect of your event can feature individualized branding and engagement. From the moment your employees hop on, they’ll know it’s an event for their specific company.

And did I mention we can use the massive video wall to broadcast your employees, too? From highlighting the current chat conversation to live streaming the actual video from each employee that dials in à la The Brady Bunch, a virtual event emcee can ensure that the focus of your holiday event is the employees who make your daily operations possible.

Personalized Assistance from a Virtual Emcee

Events include tons of moving components, so you might be wary about planning one so early in the New Year. Well, what if I told you that a virtual event emcee could handle the majority of those components for you? That’s right, a virtual event emcee like me is more than a performer, I’m also an event planner who will actively work towards developing unique elements for your company.

A great example of personalized assistance from a virtual event emcee is pre-recorded entertainment. Cheaper for you but just as dazzling for your guests, an emcee can pre-record entertainment bits from juggling to mixology to Q&As with the company CEO that will playback to virtual event attendees as if it’s occurring real-time. Talk about easy entertainment, right?

Start the Year Strong with a Virtual Event Emcee

You have an entire 12 months before you to learn, grow, and succeed. Why not start with a virtual event that can reinvigorate a tired team? Despite popular belief, January is the perfect time for you to throw a holiday party — one focused on boosting team morale and company spirit. If you need a virtual event emcee to lead the way, send me a booking inquiry today.