Las Vegas Show | In honor of World Juggling Day (July 16, 2012), we decided to catch Jeff Civillico’s new show at the The Linq. 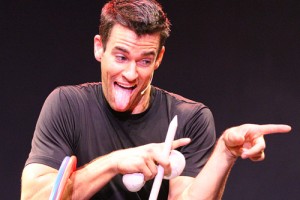 The only problem?  It’s not really a juggling show.  It turns out, Civillico’s Las Vegas show is three parts stand-up comedy, one part vaudeville, one part audience interaction, one part juggling and stunts and one very big part, “How the hell did he do that?”  Civillico is well on his way to being the brightest new star on the Las Vegas Strip.  His family-friendly show is filled, beginning to end, with non-stop laughs, and from what we saw the day we attended, audiences are eating it up.

Is this blog post the first time you’re hearing of Jeff Civillico?  Civillico’s cool with that, because as he puts it, “I’ve never heard of me either.”  His juggling props may vary, but his rat-a-tat delivery and razor-sharp wit are consistently hilarious and keep audiences clamoring for more.  Civillico knows what it takes to keep an audience enthralled because he honed his act for years as a street performer, a forum where, if you’re not entertaining, your audience can just walk away.

“My first exposure to juggling was when I was picked to be a volunteer by a street performer in the Boston area.  I re-create that bit in my show, actually, to pass it along,” says Civillico.  “Then my parents got me a book on juggling, and for years it was a hobby.  Then, I got hired as a juggler at a theme park.  I did six shows a day and learned people didn’t care if I could juggle.  They cared about being entertained.”

Which leads to the inevitable question: How does this multi-talented comedian feel about sometimes being pigeon-holed as a juggler?  Civillico says, “If you think about really good entertainers, they defy labels.  They’re really good entertainers.  Sammy Davis, Jr. wasn’t just a singer.  He was an amazing entertainer who sings, who dances, who makes jokes and gets the audience involved.  He was a gifted entertainer.  He had a connection with the audience.  That’s what I try to model myself after.  I try to focus on being entertaining.”

The laughs actually begin before Civillico’s Las Vegas show, “Comedy in Action,” even begins.  In what we suspect is a Vegas first, Civillico interacts with audience members before the curtain goes up.  In essence, he’s his own warm-up act, and has already won the audience over by the time he takes to the stage.  When the Las Vegas show wraps up, Civillico meets and greets fans.  This guy’s serious about making sure his guests get their money’s worth.

Civillico has been defying expectations for years in Las Vegas.  He developed a loyal following while performing for nearly a year at the Planet Hollywood restaurant at The Forum Shops at Caesars Palace.  He’s currently a featured performer in magician Nathan Burton’s Las Vegas show at Flamingo, and Burton co-produces Civillico’s show at The Linq.

Aside from packing them in at his 2:00 p.m. Las Vegas show at the IP, Civillico’s seemingly endless energy is also being devoted to charity through the nonprofit he created, Win-Win Entertainment.  The organization connects professional entertainers with charitable groups in need of their talents.  Jeff Civillico trivia: His first-ever solo show was at the age of 14, performing at a home for developmentally disabled boys and men.  That charitable streak is evident in his involvement with Win-Win Entertainment.  Read more.

“Comedy in Action” is easily one of the best entertainment values on the Las Vegas Strip, and among the funniest we’ve seen in Vegas, ever.  And we’ve seen everything.  We are a Las Vegas blog.  Here’s a fun bonus: Those who sign up for Civillico’s newsletter are entered to win a Vegas getaway.  He gives one away four times a year, just as a thank-you to his audiences.  Find out more at his official site.  There, you can also find a voucher for four free tickets to the Las Vegas show.  This blog loves it some free Vegas entertainment, especially when it’s awesome.

Check out Comedy in Action at The Linq and let us know how right we were about how good the Las Vegas show is.  If you don’t agree, please keep it to yourself.  Jeff Civillico uses very sharp objects in his act, and it’s probably best not to upset him.

Read the article on lasvegasblog.harrahs.com.