Nathan Burton has been dominating the Las Vegas magic scene for years. Check out some reviews from TripAdvisor from people who have seen Jeff perform at the Nathan Burton Show.

“My dad and I saw Jeff’s show during the Nathan Burton show. He was absolutely hysterical and extremely talented – we couldn’t wait to find out if he was playing anywhere else during our trip to las Vegas. We were very pleased to find out that he was playing a few hours later at Planet Hollywood. We dropped what we were doing to go watch him because his show was so great. His show is family friendly and he keeps you laughing and engages the entire time you are watching him. I love that he actually uses the audience in his show and makes sure that everyone is enjoying themselves. I will watch his website to see If he is playing anywhere in the future that I can make it to go see. 🙂 well worth your money and more!!”

“Awesome show. Jeff is very engaging with the audience and brings a ton of energy. I thought he stole the show from Nathan Burton. Definitely a must-see. And it’s inexpensive too!!!”

“My husband and I saw Jeff at the Flamingo in September. At first I was disappointed because we were going to see Nathan Burton — we had free tickets and then upgraded to a booth close to the front for $10. Several entertainers performed instead. All were great but Jeff was outstanding. He gets some of the audience involved and he juggles so many different items all the while making you laugh and gasp at the same time. It was an afternoon well spent. It beats sitting at a sidewalk cafe people watching. How many Elvises does one really need to see in a day?? Maybe Jeff could dress like Elvis, juggle and ride the unicycle.”

“What can I say, I was introduced to Jeff during the Nathan Burton show. Jeff but on an outstanding 15 minute show that kept the crowd in stitches. He announced that he had a show at Planet Hollywood………..(Restaurant) later that evening. My travel companions and I went immediately and registered for his evening show. The show was INCREDIBLE!!! He juggled, rode unicycles, told jokes, got the audience involved and I can’t count how many times he pulled out a wedgie!!! LOL!!! (You have to have gone to his show to know what I’m talking about!). If you want to have a great and entertaining evening, you gotta go see this guy and his show! It’s completely worth it!”

We saw Jeff as a part of Nathan Burton‘s show. He was a great addition to the show. My co-traveler wanted to go see the full show at PH but we just didn’t have time this trip. Next time!

If you haven’t seen Jeff Civillico’s Show, you are missing out!

I went to Vegas for my bachelor party, and funny enough Jeff’s show was the act that we liked the best (even better than the burlesque dancers!) He’s an extremely talented individual with a very professional show, but the best part about Jeff is just how funny he is! He had the whole audience laughing hysterically again and again.

I’ve seen other jugglers and balancing acts before and I often feel that 15 minutes is enough, and that there really isn’t enough content to sustain a much more than a 15 minute set, but Jeff is the opposite. Jeff id a 15 minute set during the Nathan Burton show and only left us wanting more so we saw his one man show that same night, and we weren’t the only ones. The place was sold out with people that just wanted more of Jeff and the value that you get for your money is incredible. Do yourself a favor and go see Jeff’s Show as soon as you can!

“We saw Jeff Civillico as a guest at the Nathan Burton show and we loved him, My wife and I agreed we had to see his one man show at the Forum Shops at Caesars Palace and it was HILARIOUS! We haven’t laugh so hard in a long time.
Great family fun show for all ages. We went with our kids and they loved him too!
Highly recommended.”

Ball of energy…and a barrel of fun!! 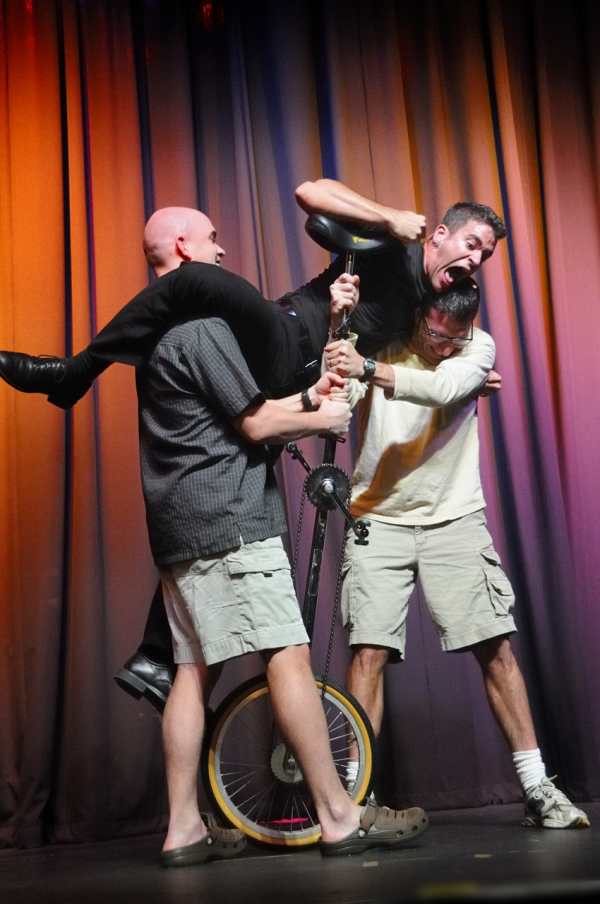 “After seeing Jeff as part of Nathan Burton’s show in Feb. 2011,we had to see his solo show, and man we are glad we did! We actually caught him twice this time, once again with Nathan’s show(Jeff was FABULOUS)and then again that night at his Comedy In Action show!(double FAB). Talk about a ball of energy….this guy can really rev things up with his “volunteers”! He was juggling and had the guy toss another pin into the fray, then another, then another, etc. I couldn’t tell if the guy was gonna stroke out from trying so hard to follow Jeff’s cues! Priceless, and a chest bump to end it! The poor guy actually kinda kept up with him, although rather spastically, and was a good sport. Also, Jeff’s volunteer/victim from Nathan’s earlier show was present with spouse, and received a couple of shout outs from Jeff, and also was a good sport about it. My wife and I laughed for virtually the entire show! His energy seems boundless and because each volunteer is different, each show is different! We would, and WILL, see him again.(hopefully at a venue that allows him to fully exploit his antics) Our trip was March 7th thru the10th, 2012 and we saw 7 shows. This was my personal favorite show(including the 3 expensive “biggie” shows we attended). We also got to meet him after the show, and he is very personable and recognized my Tripadvisor tag. I am delighted to write this review, and we strongly recommend this show to anyone with a funny bone in their body, that enjoys to laugh!(and to a few people that probably need to grow one!)Jeff, full speed ahead, keep havin’ fun, and keep the high kicks comin”. See ya again on our next trip to Vegas!!”

Next time your in Las Vegas be sure to check out Nathan Burton at the Flamingo!