The most influential connectivity event just hit Las Vegas — and I was selected as the event emcee for one of the world’s largest mobile communication companies! Last night, I had the honor of serving as emcee for T-Mobile’s Inaugural ‘Unconventional Awards’ at Rose Rooftop at Resorts World Las Vegas, and all I can say is… wow!

This was not only a best in class event but also a master class in uniqueness, creativity, and engagement that myself and every attendee is sure to remember. At a time when the Las Vegas Strip (and surrounding Las Vegas entertainment) was at its peak, here’s a quick look at how T-Mobile captured and maintained audience attention all night long.

This weekend marked the annual Mobile World Congress Las Vegas, the event dubbed as North America’s most significant connectivity event for those in the technology and mobile ecosystem. It’s a three-day event to build strong relationships between carriers and equipment manufacturers, mobile app developers, and content creators.

In the midst of the Mobile World Conference (MCW) 2022, I was hanging with T-Mobile for Business at their first-ever Unconventional Awards. This event was all about celebrating T-Mobile for Business Customers who are disrupting their industries, breaking conventions, and challenging the status quo, complete with nine award recipients.

If you couldn’t guess by the title of “North America’s largest and most influential connectivity event,” MWC 2022 was kind of a big deal — as in, a huge deal. So, it goes without saying that the Las Vegas Strip was booked and busy this weekend… and T-Mobile had to navigate a ton of natural event inertia and energy flows. Here’s how they mastered it!

What do you do when there’s unlimited Las Vegas entertainment but limited time to enjoy it? You go wherever there is the most buzz. And this weekend, the buzz-worthy spot was Resorts World Las Vegas, the newest property on the Strip that boasts an incredible technology and luxury appeal. What better spot for the mobile ecosystem, right?!

Being the newest property in town meant that the venue alone created a ton of attention for T-Mobile’s Unconventional Awards. The awards took place on the Rose Rooftop, where the ambience of the outdoor nightlife truly set the scene. In my 15 years on the Strip, it’s rare for me to perform in a new space, let alone one so incredible! 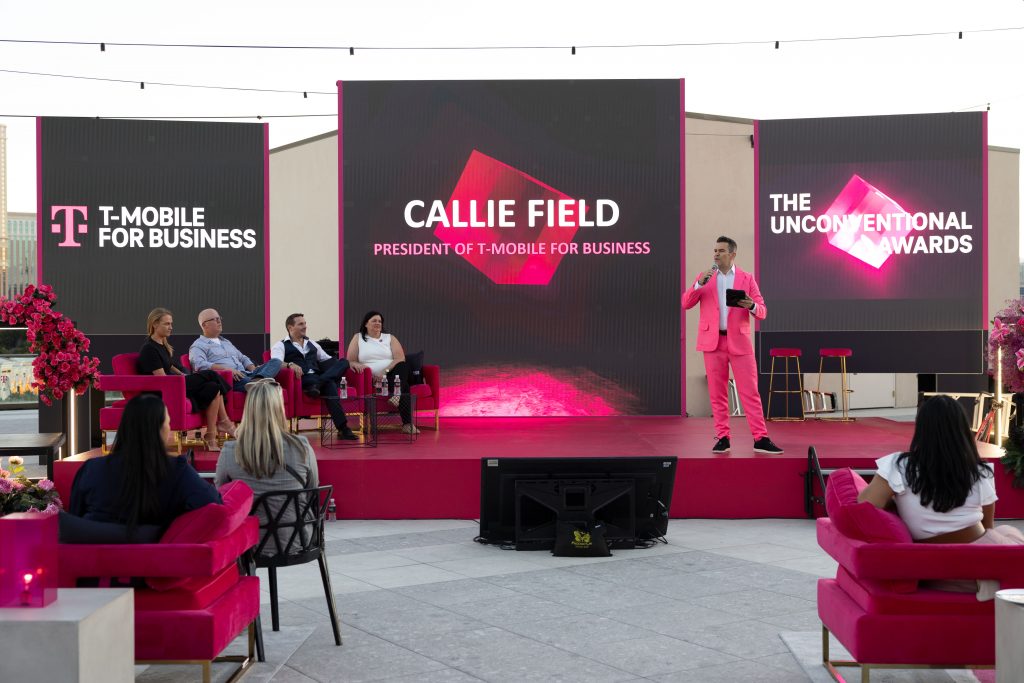 Aside from a phenomenal location, the Unconventional Awards had an awesome theme — unconventional! Being that T-Mobile calls themselves the “Un-Carrier” it was no surprise that the first ever awards for T-Mobile for Business customers were Un-Conventional. Everything at the event was funky, from the speakeasy-like bar for the drinks to the event entertainment (more on that soon!). Attendees were captivated by the uniqueness of it all!

Of course, no one-of-a-kind event is truly one-of-a-kind without eccentric entertainment. Folks, T-Mobile really outdid themselves in that department! In terms of music, the rooftop was thumping to an electric violin, saxophone, and drum set that lit up the night. The DJ set the perfect tone with energetic music that wasn’t overpowering.

Up next was Napkin Killa — yes, you read that right! Napkin Killa is an incredibly talented portrait artist who creates hysterical artwork all on, you guessed it, cocktail napkins. This dude was such a blast to watch in action, and his finished products were even cooler! This was Las Vegas entertainment at its very best. 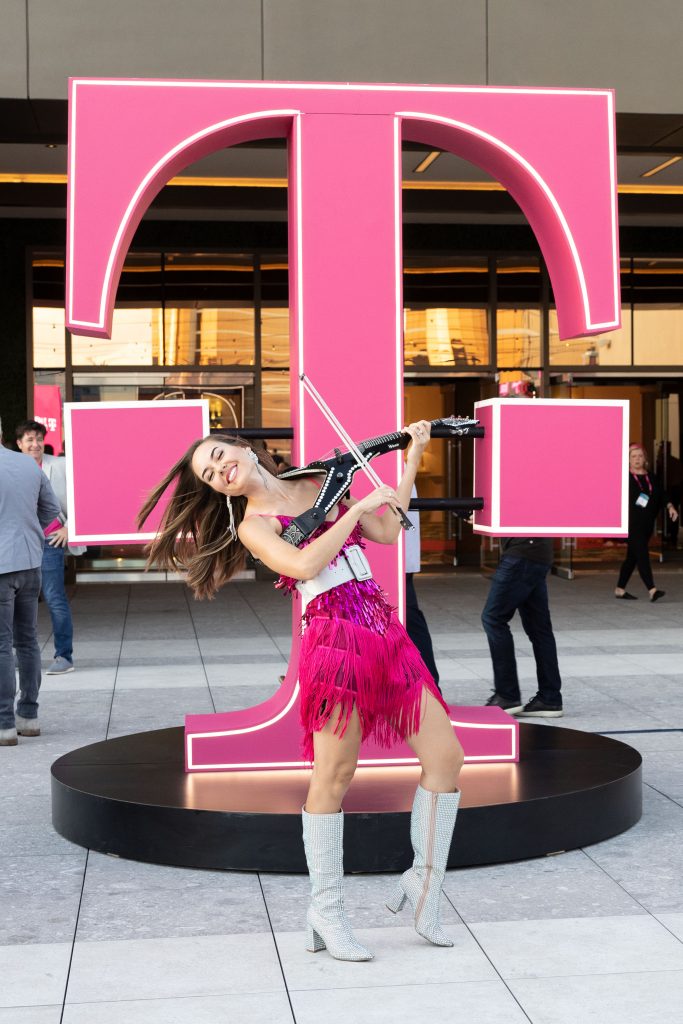 The purpose of the Unconventional Awards was to celebrate T-Mobile for Business customers who dared to innovate. As the evening’s event emcee, I announced nine award recipients in three categories: Innovation in Customer Experience, Innovation in Employee Enablement, and Innovation in Industry.

So, what sets this award show apart in terms of engagement? T-Mobile knew to keep it simple. They realized that attendees wanted to socialize and enjoy a drink on the rooftop — not stand through a boring award show. When we began the awards, I set the expectations for the crowd by saying that T-Mobile wanted attendees to mix, mingle, and have fun, but we just wanted their attention for the next 20 minutes to celebrate their peers.

The awards went off without a hitch! We kept it as short as possible, which wasn’t hard since there were only nine awards across the three categories. And by informing the audience of this beforehand, we were able to keep the crowd engaged the entire time. T-Mobile really crushed it here, and I was sure to take notes for future events!

It’s so critical to not fight against the natural energy at large-scale events like Mobile World Congress Las Vegas. Instead, you should harness it; and for that, you need an all-in event emcee. Such occasions need an event emcee who is going to take charge and own it, especially if the event will be outside like the Unconventional Awards were.

In reality, outside events are hard. There are significantly more distractions than there are in a traditional ballroom or indoor venue. It’s difficult to keep people’s attention focused, and the event emcee must know how to be loud on the mic! As a seasoned Las Vegas entertainer, I knew to switch to a handheld mic and really ‘eat it’ as we say, so the crowd could hear me over the wind. Event emcee knowledge like this is a must-have!

It goes without saying that a spectacular event requires unbelievable support. Fortunately, T-Mobile secured incredible event staff to ensure the evening went off without a single problem! The planning and execution team was phenomenal — shout out to Callie Field, Allan Samson, Jodi Schade, and Janet Redding!

I also have to tip my hat to everyone at T-Mobile who made the evening possible, including the awesome Kay Dalton and Sara Dalton. Another major kudos to everyone at Fresh Wata! Their crew of talented artists, craftsmen, producers, and technologists are second to none. Plus, I cannot forget to thank all of the support and wait staff at Resorts World! 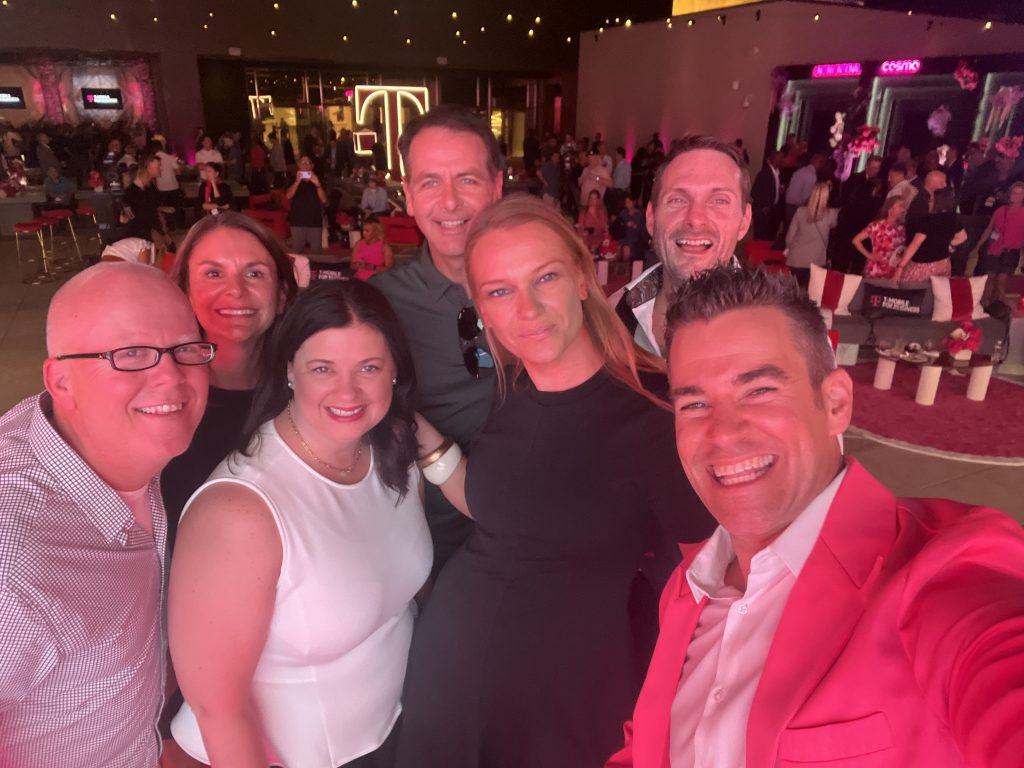 Want to Drive Engagement at Your Event?

Do you want to capture and maintain audience attention, drive engagement, and encourage interaction at your next event? I can help with that! As a professional event emcee with over a decade of Las Vegas entertainment experience, I’m able to create unrivaled rates of connection at events. Contact me today to get started!