Check out this great article on my opening act from Steve Bornfield, about Alonzo Jones, better known as… Turf!

He was homeless for a while and famous for a moment. Then San Francisco contortionist/dancer Alonzo Jones arrived in Vegas to make the Strip his Turf. 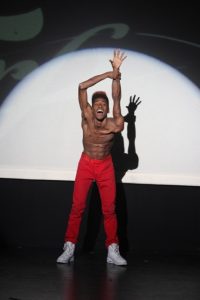 Somewhere, a chiropractor hopes to hit the patient jackpot.

“Doctors go ballistic when I walk into their office!” says—make that gleefully chortles—Alonzo Jones, a.k.a., Turf, a.k.a. the dancing, double-jointed, human twisty toy knotted up onstage, whose afternoon audience at the Quad’s Q Theater could suffer sympathy arthritis pains just watching him.

“When I go for a checkup or X-rays, they can’t wait. They’re like, ‘That’s the kid! Come right here! Lay right here!’”

Hopefully, no sawbones will buy a yacht off the medical expenses of the highly pliable 22-year-old—a once-homeless San Francisco street dancer-turned-America’s Got Talent semifinalist-turned-Vegas Strip performer.

How can Jones break any bones when, by all visual evidence, he has none? Or at least none stiff enough to snap? Look at him. LOOK AT HIM. Nature didn’t intend for arms and legs to stick up there and slide through there and rotate through there and wind up there.

Has anyone booked this guy for a pretzel commercial—or would he give pretzels an inferiority complex?

“I love the oh-my-God! reaction because it’s so real, it lets me know it’s a talent that people don’t see every day,” he says of his moves, which he’s even named: Meet The X Factor, The Windmill, The Airwalk and The Optimus Prime.

(How about … The Ouch!) Boldly, Jones adopted his stage name, Turf, from the turf-dancing style to which he brought national attention—and garnished with anatomy-defying exertions—on America’s Got Talent last year. Originated in the streets of Oakland in the 1990s (with certain elements tracing back to the “Oakland Boogaloo” movement of the 1960s), turf dancing—which stands for “Taking Up Room on the Floor”—is a stylistic stew of steps. Mostly a hip-hop mash-up, it’s improvisational, free-flowing, everything-including-the-kitchen-sink dancing.

Beyond the moves a culture sprang up, centered on “dance battles,” sometimes to (nonviolently) settle disputes between street kids, sometimes simply to compete.

“You would have the King Tuts back in the day,” Jones explains (paging Steve Martin). “Now you got people [who] do digits with their fingers, and finger-tutting with their feet, and then the contortions getting into the hip-hop scene. It’s very technical.

Wearing a grin one suspects hasn’t left his face for months, Jones is a wispy, 5-foot-9, 143-pounder with a Tupac Shakur-inspired “juice-fade“ haircut—a two-level ’do with a zig-zaggy part that angles up into a striking thatch of green/red/whatever strikes his mood. Genuine sweetness—a gee-whiz demeanor with a whiff of hip-hop edginess—radiates off him. Relaxing in a Q Theater booth about an hour before opening for juggler Jeff Civillico—a gig he’s had for seven months that was recently renewed through the summer—Jones recalls discovering his rare talent in childhood.

“I could do a simple thing with my arms, putting them in front of me and pulling them all the way to the back of me and touching my back,” says Jones, who counts Michael Jackson as a major influence—but not a dance template.

“Michael Jackson was the man. But I wanted to perform without being anything like him. It was his originality I admired and the respect he had for dance. When it came to dancing and coming up with new moves, it was about trying to make a cool look and different kinds of dance moves.”

Americans learned his reach-for-a-dream story after Jones landed on America’s Got Talent. One of seven children (“with different moms and different dads”) in San Francisco, he was street-dancing when he graduated high school, determined to transform his talents into a career, but ran afoul of his single mom’s workaday ethos.

“It was an argument that got out of hand,” Jones says, his voice tinged with regret rather than resentment. “She threw these words at me, ‘You have to get a job or you gotta go.’ Me being over-prideful, I said, ‘I’m leaving now, bye.’ She didn’t stop me. It was a weird argument that went totally wrong.”

While the oft-repeated narrative describes the two-year homelessness that followed, Jones rejects the description, pointing out that he usually had a couple hundred bucks in his pocket from street dancing every day and night.

“In my mind, I was never homeless, and you couldn’t tell I was homeless if you saw me,” Jones says.

“I was at the skankiest hotels, where you could only stay three nights a week, but I’m not a naturally dirty person, so I would clean it up the best I could. Then I would keep my street-performing equipment in a liquor store and they would allow me to keep two suitcases of clothes there. I would stay up all night or at a friend’s house if they allowed me.”

Following are elements woven into the amalgam of turf dancing:

Fate gave him a wink and a smile when America’s Got Talent auditions came to San Francisco—he registered online, danced his heart out at the tryouts and made the cut.

Performing his blend of contortions and robotic moves to the Black Eyed Peas’ “Boom Boom Pow” in his initial televised appearance, Jones also relayed his story. Breaking into tears, he touched a national audience and judges Sharon Osbourne, Howie Mandel and even famously anti-softie Howard Stern (who called Turf “an amazing talent”).

Sent to the Vegas round, Jones contorted himself to Lil Wayne’s “I Am Not a Human Being,” propelling him to the quarterfinals, where he busted moves to the Black Eyed Peas’ “Imma Be,” landing him at the semifinals—where the journey ended. Dancing to Chris Brown’s “Yeah 3x,” he came up short on votes and was eliminated.

“I can honestly say I wasn’t disappointed at all. I never thought I lost anything,” says Jones, who found Las Vegas to his liking. “When I first came, I had a little bit of money from street performing in San Francisco. I saw the streets flooded [with people] at night, so I went out there with my boom box and danced till 4 in the morning. In my first night I made a lot of money, so I said, ‘I’m staying.’”

Staking out a spot in front of Bally’s—before Clark County seriously cracked down on Strip street performers—Jones entertained passersby until a special one passed by: talent agent Mike Young.

“I thought, I know who this kid is and I’ve got to watch him,” Young remembers. “I had been affected by his story. I said, ‘Why are you still street performing? Do you have a manager?’ He said no. I said, ‘How can that be? You’re endorsed by Sharon Osbourne and Howard Stern, for God’s sake.’ He said, ‘Nobody has asked me.’ I said, ‘Well, I’m asking.’”

“I’m not making a lot of money off him, but I wanted to ensure that he would never be on the streets again,” Young says of Jones, who moved into a Vegas apartment. “I wanted to get him a legitimate job, groom him for the entertainment world because someone like him could turn this into a lifelong career.”

Do Not Try This at Home

Here are several standard contortionist positions we advise you to avoid assuming at all costs:

After Civillico included Jones in one of his benefit events at the South Point (his Win-Win Entertainment, a nonprofit program, matches local performers with charity organizations), a deal was struck, and the two partnered as opener and headliner.

“He’s such an awesome opener because he wakes people up,” Civillico says. “That’s what you want at 2 in the afternoon when people come in with this glaze over their faces. You can’t watch him and not go, ‘Oh, my GAAAAWD!’”

Hang out with them before the show and you can feel the big bro/little bro vibe between the modest contortionist and the animated juggler, himself a Strip up-and-comer, which makes their career connection something of a shared journey. “I know exactly where he is right now, he needs a home base in Las Vegas,” says Civillico, who performs many outside gigs, including corporate events, and notes that Jones is also booking one-shot appearances beyond Vegas now, from Chicago and New York to Istanbul and France.

“He needs flexibility more than money. He will text me and say, ‘I just got asked to do the [Denver] Nuggets halftime show’ and I’ll say, ‘Great, go.’ It doesn’t have to be cleared by any producer. It’s a good fit.”

Potential gigs galore don’t dim Jones’ appreciation for the shot Civillico gave him. “My focus this summer is to prove that I should totally be here,” he says. “I got blessed with the opportunity to do this show.”

Here’s a happy postscript to The Alonzo Jones Story: Mother and son reconciled. “I talk to her and go back to see her,” Jones says. “She really works hard at Bank of the West and she’s tied down to San Francisco, and I help her out when she needs me. She didn’t expect me to go on TV and, as she says, captivate a lot of people’s attention.”

Damn, that looks painful. Even excruciating. Just watching him may be enough to put someone in traction. “It never hurts when I’m not doing it, only when I perform,” Jones says about some joint and muscle aches.

So he does it … why? “It’s like a boxer. He might break his hand every time he fights. Why do it? Because he loves to fight. This is just what I do. Besides, it’s not a big pain, just a weird pain you get used to.”

Corrective? Occasional Tylenol tabs. While Jones visits a doctor monthly and gets X-rays “as needed,” the diagnosis amounts to possible bouts of arthritis someday. Amazingly, no bodily damage has surfaced so far.

Sorry chiropractors: No huge payday to be made off this kid’s exceptionally strong, extraordinarily limber, mind-blowingly flexible back.

Lawyers might line up, though—his neck and spine could sue him for abuse.